In this blog post…
1. Chart of actual costs of new health care bill
2. The seven tax hikes of the bill of families who make less than $250,000
3. A list of the kickbacks and state giveaways 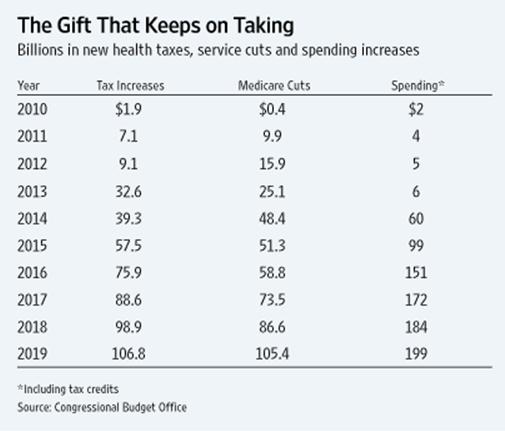 With the release of Sen. Harry Reid’s Manager’s Amendment, the Senate healthcare bill now contains seven tax hikes on families making less than $250,000 per year. Each of the seven tax hikes are in violation of President Obama’s “firm pledge” not to raise “any form” of taxes on these families. Obama’s promise remains for all to see at the Change.gov website: “no family making less than $250,000 will see their taxes increase.” White House spokesman Robert Gibbs has confirmed that there are “no caveats” to Obama’s promise.

Individual Mandate Tax (Page 324/Sec. 1501/$15 bil/Jan 2014): Starting in 2014, anyone not buying “qualifying” health insurance must pay an income surtax according to the higher of the following (page 71 of manager’s amendment updates Reid bill):

Employer Mandate Tax (Page 348/Sec. 1513/$28 bil): If an employer does not offer health coverage, and at least one employee qualifies for a health tax credit, the employer must pay an additional non-deductible tax of $750 for all full-time employees. Applies to all employers with 50 or more employees.

Small business owners pay their taxes on their owners’ personal tax returns. Since this provision does not exempt business owners making less than $250,000 per year, this employer mandate tax will violate President Obama’s promise in some cases.

HSA Withdrawal Tax Hike (Page 1998/Sec. 9004/$1.3 bil): Increases additional tax on non-medical early withdrawals from an HSA from 10 to 20 percent, disadvantaging them relative to IRAs and other tax-advantaged accounts, which remain at 10 percent.

Tax Hikes on Medical Spending for Those Making Less Than $250,000

“Senator Ben Nelson, Democrat of Nebraska, was the critical final Democrat to endorse the bill. He obtained tighter restrictions on insurance coverage of abortion, and additional Medicaid money and other benefits for his state.

Another item in the package would increase Medicare payments to hospitals and doctors in any state where at least 50 percent of the counties are “frontier counties,” defined as those having a population density less than six people per square mile.

And which are the lucky states? The bill gives no clue. But the Congressional Budget Office has determined that Montana, North Dakota, South Dakota, Utah and Wyoming meet the criteria.

Another provision would give $100 million to an unnamed “health care facility” affiliated with an academic health center at a public research university in a state where there is only one public medical and dental school.

Senators and their aides said on Sunday that they were not sure who would qualify for this money or who had requested it.

Dr. Atul Grover, the chief lobbyist for the Association of American Medical Colleges, said he believed that Commonwealth Medical College, a new school in Scranton, Pa., was a likely candidate.

Reached at home on Sunday, Dr. Robert M. D’Alessandri, the president of the medical school, said initially, “We meet the conditions” in the Senate proposal. But then he said he was not so sure.

The Senate health bill, like one passed by the House last month, would impose tough new restrictions on referrals of Medicare patients by doctors to hospitals in which the doctors have financial interests. The package assembled by Mr. Reid would provide exemptions to a small number of such hospitals, including one in Nebraska.

Under the original Senate bill, doctor-owned hospitals could qualify for this exemption if they were certified as Medicare providers by Feb. 1, 2010. Mr. Reid’s proposal would move the deadline to Aug. 1, 2010.

Under the proposal, Ms. Sandvig said, “doctor-owners can continue to refer Medicare patients to the hospital” in eastern Nebraska.

“Senator Nelson has always been a friend to our industry,” she said. “But doctor-owned hospitals in other states were not so fortunate. They would not meet the Aug. 1 deadline.”

A blog from The New York Times that tracks the health care debate as it unfolds.

Another item in Mr. Reid’s package specifies the data that Medicare officials should use in adjusting payments to hospitals to reflect local wage levels. The officials can use certain new data only if it produces a higher index and therefore higher Medicare payments for these hospitals.

Senate Democrats said this provision would benefit hospitals in Connecticut and Michigan.

Mr. Reid’s proposal also provides additional money to several states to help pay for the expansion of Medicaid to cover many childless adults and parents who did not previously qualify.

Senate Democrats said Saturday that the cost would probably be less than $100 million over 10 years. But the Congressional Budget Office said Sunday that the cost of this provision, benefiting Massachusetts, Nebraska and Vermont, “is approximately $1.2 billion over the 2010-2019 period.” Massachusetts and Vermont have been leaders in providing health insurance to their residents.”