The U.S. homicide rate is the lowest it’s been in at least 54 years.

Gun crimes are also down. Two studies reported on by the LA Times in May 2013 found that “Gun crime has plunged in the United States since its peak in the middle of the 1990s, including gun killings, assaults, robberies and other crimes, two new studies of government data show.” and “In less than two decades, the gun murder rate has been nearly cut in half. Other gun crimes fell even more sharply, paralleling a broader drop in violent crimes committed with or without guns. Violent crime dropped steeply during the 1990s and has fallen less dramatically since the turn of the millennium. The number of gun killings dropped 39% between 1993 and 2011, the Bureau of Justice Statistics reported in a separate report released Tuesday. Gun crimes that weren’t fatal fell by 69%.”

The declining crime rates have been accompanied by a dramatic increase in the number of concealed carry holders in the U.S. – Americans who have a permit to carry a concealed firearm.

According to a 2012 Forbes article, there were about 1 million concealed-carry holders in the U.S. in the mid-1980s. By the end of 2011, that number had grown to 8 million, according to a 2012 Government Accountability Office report. A report by John Lott and the Crime Prevention Research Center shows the number of concealed-carry holders had increased to at least 11.1 million by July 2014. 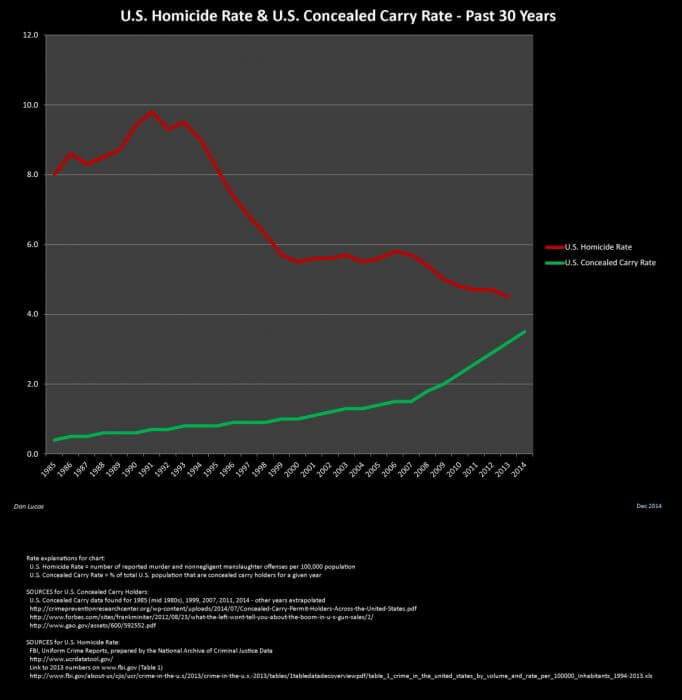