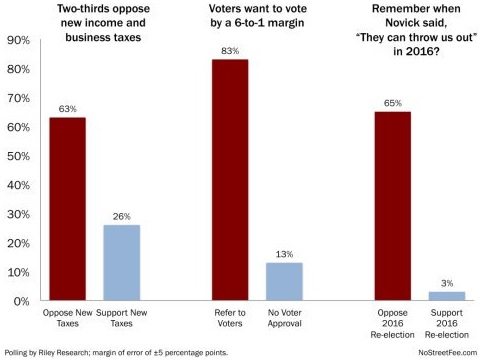 Nearly two-thirds of likely voters in the City of Portland are opposed to the new personal income and business tax (63%), including 50% who strongly oppose the proposed new tax. With 26% in support of the new tax, 11% are undecided.

Likely voters age 18-34 were slightly more likely to support the proposed tax (34%), although a plurality of voters in that age group oppose it (47%). Pre-retirement voters (those 55-64) were most likely to oppose the new tax (72%).

More than eight-in-ten voters (83%) feel that the decision about whether or not to implement the new tax should be referred to the voters, including 71% who strongly support referring the decision to the voters. About one-in-eight voters support a decision by the council alone (13%), and only 4% were undecided on the issue.

The referral-to-voters option is favored by 76% of Democrats and by more than 90% of those representing all other political stripes.

While 58% of Democrats would be less likely to re-elect Hales and Novick, 38% said the issue would make no difference.