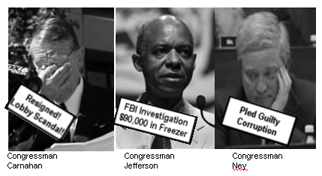 In the end, the congressional scandals and ineffectiveness to pass much demanded legislation colored the entire national and local landscape. It began with Delay, Abramoff, and Katrina last year and kept erupting new hideous examples for 400 days until today. How many times did Congress pass on voting for key issues because they couldn’t bring the issue to the floor (even though they had the votes to pass it!) It spoiled Saxton’s “change” message because his party was acting out the exact opposite on the national stage. Those local Oregon incumbent Republicans House members that are losing were already under a party registration disadvantage in their district, and the national negative wave swept them under.

The negative politics soured political solutions like ballot measures in Oregon and across the country. That’s why voters rejected campaign finance reform in a hot season of lobby scandals. It was a “don’t rock the boat” vote. Voters already reject most measures on the ballot by nature, and then this year most of the measure opposition campaigns wildly outspent the pro-side (see 40, 41, 42, 43, 46, 47, 48).

Many of the best Democrat challengers in Congress ran on pro-business, conservative issues, or their military credentials— and rightfully so (see Sestak, Carney, Webb, Tester, Casey, Weaver, Giffords, Mahoney, Ellsworth). There were good developments in the Democratic Party that were often overlooked in the name of partisanship.

Voters will be best served if the messages they send are heard and acted upon.

What is your take?