Seventy years ago at this time the Allies were in a desperate fight to repulse Hitler’s last gasp offensive in Western Europe. From mid-December 1944 to late January 1945, American and other Allied forces fought in freezing temperatures to defeat the German attack aimed at splitting the Allies and taking the crucial port of Antwerp in Belgium.

According to a 2008 Flint, Michigan newspaper story, the Battle of the Bulge was the bloodiest battle of World War II and “the single largest battle in the history of the United States.” Half a million Americans fought in the battle and there were almost 90,000 American casualties, including a least 19,000 souls who perished in those six weeks. By comparison, 6,700 Americans have lost their lives in the fourteen years of the current War on Terror — the wars in Afghanistan and Iraq.

We owe a profound debt of gratitude to those brave Americans who fought in that cold winter seventy years ago, especially to those who never made it home. To the ones who didn’t get to spend any more holidays with their moms and dads, who didn’t get to finish college, or to raise a family.

Veterans who fought in the Battle of the Bulge spoke of remembering the battle nearly every day of their lives. Remembering the bitter cold and the close friends they lost. Veterans who are themselves being lost to us more and more. Those few surviving veterans are now in their late 80s and 90s.

One of the veterans who fought there was Don Malarkey, a long-time Salem resident. Don had a long journey from humble beginnings growing up in Astoria all the way to fighting with the famed 101st Airborne to hold the key crossroads town of Bastogne during the battle. On his journey, Don met Gen. Dwight Eisenhower, British Prime Minister Winston Churchill and Gen. George Patton. He parachuted in on D-Day, fought in Operation Market Garden and then fought with the heroic “Battered Bastards of Bastogne”.

After literally saving the world, Don and his generation returned to “normal life.” Don returned to the University of Oregon, met and married his wife and raised a family. He worked in Astoria, Portland and finally Salem before retiring in 1982.

But there was another epic bookend to Don’s “normal life.”

In 1987 Don left his quiet South Central Salem home to attend a reunion of his 101st Airborne “Easy Company” comrades in New Orleans. At the reunion, Don met a professor from the University of New Orleans, Stephen Ambrose. That led to Don being interviewed by Ambrose and travelling along with other “Easy Company” veterans as Ambrose wrote his book on “Easy Company’s” exploits. The book, and later HBO mini-series was “Band of Brothers.” Don was featured in both the book and mini-series and he served as one of the advisers for the Steven Spielberg and Tom Hanks mini-series. Don’s relaying the story of the Niland brothers to Ambrose may have ultimately led to the making of the blockbuster movie “Saving Private Ryan.”

Don went on to travel all over the world, visiting the troops, attending premiers and even having tea with the future King of England! Trips he managed to squeeze in between Thursday beers and games of three-cushion billiards at Salem’s Cue Ball.

Because of what Don and his generation did, we are all able to enjoy a better world this holiday season. Something we can be thankful for as we reflect on the sacrifices made one very cold winter seventy years ago. 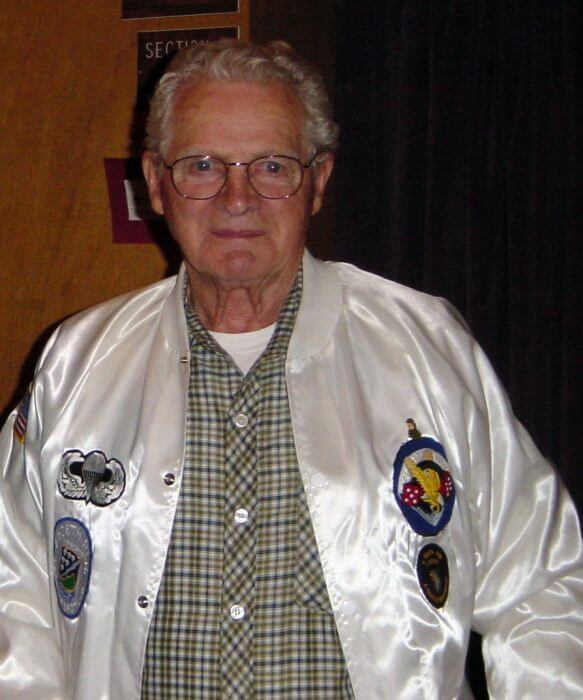 Don Malarkey at Willamette University in 2003 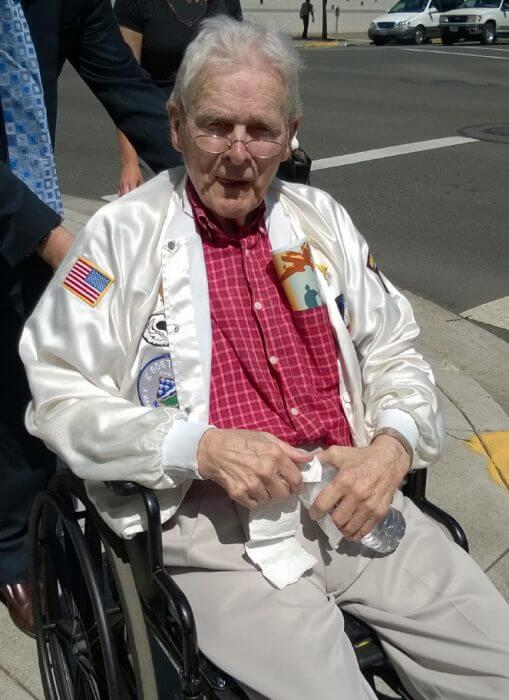