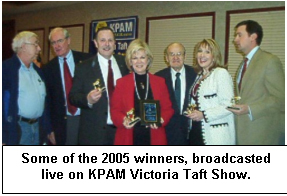 The 2006 Taxpayer Awards are just around the corner and we need YOUR submissions before we close our nominations. Now is the time to recognize the noble and lousy work of our representative democracy. Here is the award we need your nominations for:

Thomas Jefferson Award is the award for any citizen for advancing the principles of individual liberty and limited government in 2005. The 2005 winner was Rep. Linda Flores for her work exposing the horrible Cultural Competency program.

Wiener Politician Award is the award for the most obnoxious, cowardly, or reckless idiocy by an elected official. The 2005 winner was Judge Mary Merton James for overturning Measure 37 on the most insane legal grounds.

Pork barrel Project is the award for the biggest waste of government money in 2005. The 2005 winner was “$3.4 Million Empty Office” The Human Services Dept. wasted $3.4 million leasing four floors of an expensive downtown building for 10 years of vacancy.

Bureaucratic Bungler is the award for the worst example of government regulation, bureaucracy, or mistake. The 2005 winner was the Governor’s “Hug-a-Wolf” Program: Governor Kulongoski’s plan calls for re-populating thousands of dangerous non-native wolves into rural Oregon, and criminalizing any farmer who dares injure a wolf eating his farm animals.

What is your nomination?