Back in January, I wrote that the Legislature should focus on education performance because Oregon had the second-worst high school graduation rate in the country. It’s gotten worse since then. In late January The Oregonian reported that Oregon had gone from second-worst to worst.

Obviously there are no simple answers, but clearly it’s going to be difficult to improve education performance without adequate funding. Lately, state Sen. Tim Knopp (R-Bend) has been advocating for increasing the state’s K-12 funding to $8.0 billion. After the latest revenue forecast was released in mid-February, Sen. Knopp said “With this extra tax revenue from economic growth and higher wages, we have no excuse for shortchanging Oregon classrooms. This is our green light to immediately and fully fund K-12 education at $8 billion so school districts have the certainty they need to plan for next school year.”

Oregon’s 200 or so school districts get a little under half of their overall budgets from the K-12 state school fund. The remainder comes from property taxes, local levies and federal funding. In the current 2-year budget cycle, the K-12 state school fund is $6.65 billion. Gov. Kitzhaber’s proposal for the upcoming 2015-17 budget was a modest increase to $6.91 billion, and the Democratic Ways and Means Co-Chairs are proposing slightly more K-12 education funding, $7.2 billion.

But that’s not enough, and there is plenty of money in the 2015-17 budget to help compensate for years of anemic K-12 funding. Funding that has seriously lagged behind the growth of the state general & lottery funds recovery. 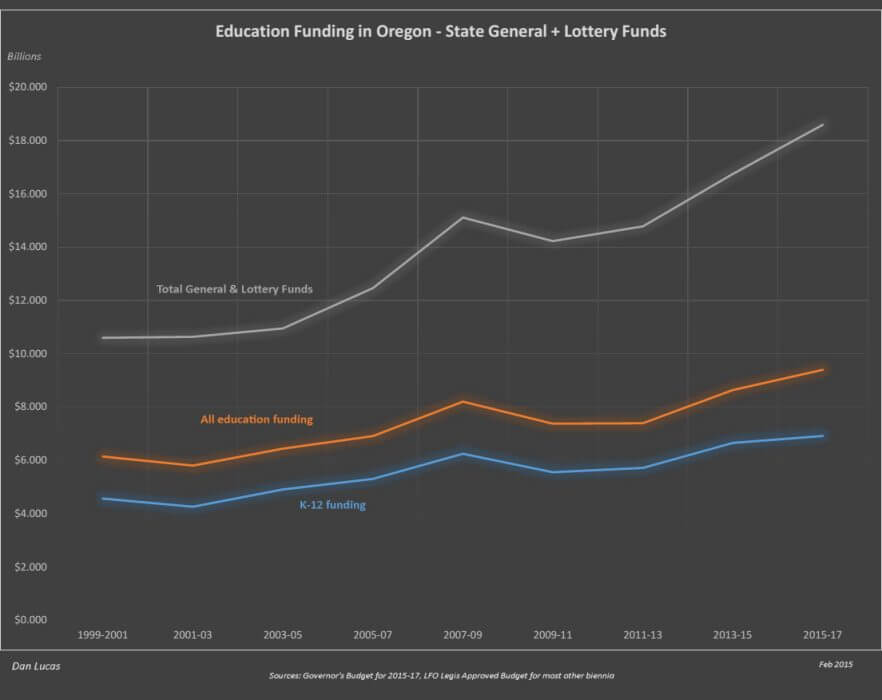 I understand that part of the money will go to pay for past PERS excesses, but for now that can’t be changed given the Democratic majorities in the Oregon house & senate and with a Democratic governor.

I also understand that there may be ways to more effectively use our education dollars, but I believe that is best addressed at the local school district level. That’s where parents and other concerned citizens can have the greatest impact on those issues in their local schools.

Oregon parents, teachers, school administrators and other concerned citizens should support the $8 billion K-12 funding in SB 642. It requires no new taxes. It’s just making sure that more of the revenue increases from an improving economy and population growth go to K-12 education. Contact your state representative and state senator and ask them to support it, and if they don’t, demand to know where all the increases to the state’s general and lottery fund budget have gone the last several years.