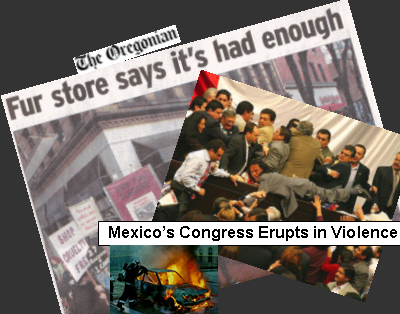 Two similar news items on the same day showcase the politics of harassment. First we have a Portland fur store owner chased out of town by violent animal activists. Second we have the losing liberal party in Mexico started a fight inside thier own Congress to prevent the new president from taking the podium.

Animal rights activists have been violently protesting Schumacher Furs in downtown Portland for over a year. The protests have included:
– Called in death threats at the Schumacher’s home.
– Cut windows, spray painted vandalism and threw feces
– Stalked customers to their cars, followed them as they went into other businesses.
– Destroyed company locks.

Schumacher reported such activity to the police, but the police began to back off from helping the store owner in traditional straight forward terms. The police recommended that the storeowner close on weekends, or block his windows, and to stop calling the police for every criminal act. Without proper police protection Schumacher has no choice but to leave.

The leftist Mexican Presidential candidate, Lopez Obrador, said there would be trouble if he didn’t win, and made good on his promise when he didn’t. The election was the most watched and verified by outside monitors of any election south of the United States. Even after an unprecedented second review, Obrador still lost and yet claimed fraud. Obrador incited riots and civil unrest, designed his own presidential sash for his own innaguration and is now organizing a parallel government. Riotous Obrador supporters have held back Police for two months over a main street in Mexico City. Lawmakers loyal to Obrador rushed the podium in Congress to prevent the president elect from making a speech (see photo). Supporters claim to never let the president elect have a single day of rule, and to continue rioting for the next six years.