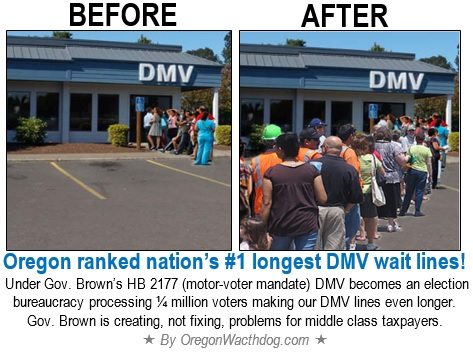 Oregon, which ranks the nation’s #1 longest DMV lines, could see those lines getting longer under the newly approved Motor Voter Law making voter registration automatic in Oregon. The new law is ripe with problems, escalating costs and privacy risks. People who are registered with the DMV will automatically be registered to vote, potentially adding another 300,000 to the state’s registry. Driver’s license data going back to 2013 will be used to register eligible Oregonians who aren’t already registered, particularly younger and poorer Oregonians who tend to move more frequently.

The new law raises concerns about privacy and ID theft. The DMV will share personal information with election officials who maintain voter rolls that are open to the public. Only those with protected status, such as certain crime victims and police officers, will be exempt from having their DMV data transferred.   It is unclear whether a privacy victim of the new Motor Voter Law would then fit the classification of a crime victim exemption from the law itself.