The U.S. Fish & Wildlife Service (USFWS) recently announced it will consider changing the status of the Northern Spotted Owl (NSO) from “threatened” to “endangered” as owl populations continue to decline. The species’ listing in 1990 led to a 90-percent decline in federal timber harvests and restrictions on other forest management activities. 24 million acres of federal land in the Pacific Northwest have largely been set aside for the owl, including 12 million acres of forestland identified as critical habitat. Unfortunately the USFWS’ approach has failed to address the real threats to the species while devastating the socioeconomic health of many rural communities.

Any serious effort to recover NSO populations should address the real threats to the species: stand-replacement fire and the barred owl. Claims that a lack of habitat is harming the NSO lack any basis in fact. This backgrounder discusses USFWS’ inadequate efforts to address the species’ most aggressive predator. 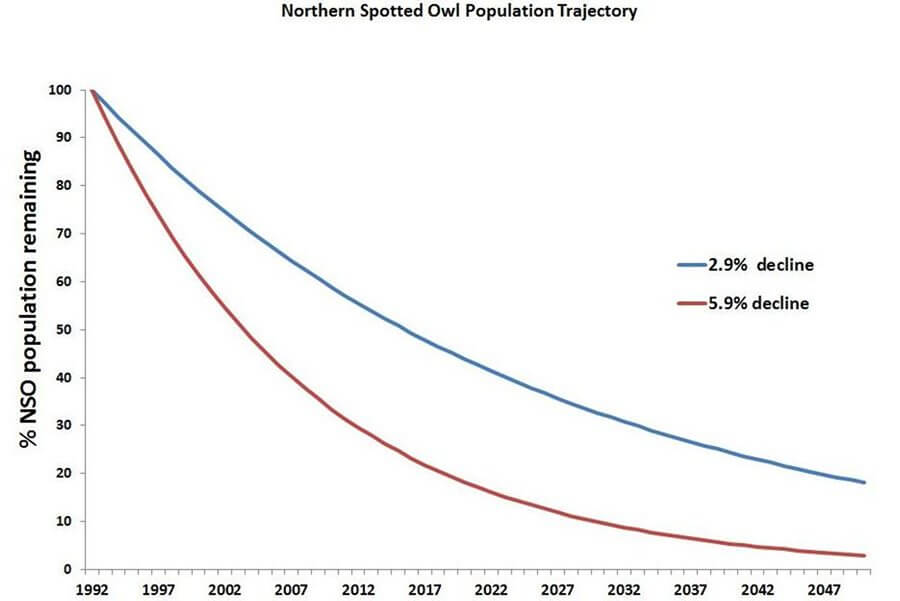 By 2004, the preponderance of evidence lead a team conducting a 5‐year status review to conclude “that the barred owl is a significantly greater threat to the spotted owl than originally estimated at the time of listing.” By this time, the overall NSO population had declined by 30 percent from its 1992 level. 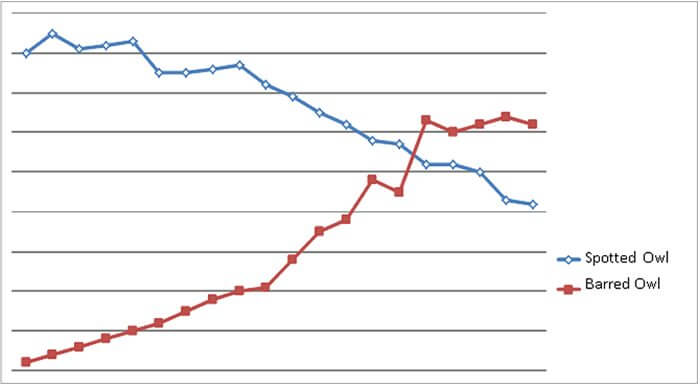 In 2008, the USFWS released the NSO Recovery Plan that identified competition from barred owls as a main threat to the spotted owl. Roughly a third of recovery actions address the barred owl threat, including consideration of measures relating to a barred owl removal experiment. In the four years it took to prepare the recovery plan, another 8 percent of the NSO population was lost.

In February 2009, a Barred Owl Stakeholders Group was formed as part of the scoping process for the barred owl removal experiment. In December 2009 a formal scoping notice was issued. The final Environmental Impact Statement and Record of Decision for this experiment was signed September 2013. By this time another 9 percent of the NSO population was lost, bringing the NSO population down to 54 percent of its 1992 level.

The purpose of the Barred Owl Removal Experiment (BORE) is to gather information on the effectiveness, feasibility and cost of removing barred owls to aid in the conservation of the NSO. (Research on private lands in California and research in Canada had already shown that the NSO population and reproductive success increased as barred owls were removed.) The BORE calls for barred owl removal within four study areas distributed in Washington, Oregon and California, but thus far limited removals have only taken place on tribal lands in California. The USFWS cites a lack of funding as the reason for the slow start but the agency has never requested appropriations from Congress to fund the effort. It is no surprise that there is no firm schedule for conducting this experiment only that “(R)emoval activities will end when data are sufficient to meet the purpose and need.” A maximum duration of 10 years of barred owl removal was stated for the BORE. At the end of this 10 years, another 13 percent of the NSO population will be lost.

After the BORE is completed (sometime after 2022), if they find that removing barred owls leads to an increase in NSO’s (which is likely), the USFWS would then embark on a lengthy regulatory and legal process in the hopes of removing enough barred owls to make a significant impact on the NSO population. This could take yet another 10 years, at which time the NSO population will only be at about 30 percent of its 1992 level and likely extirpated from major portions of its range.

In the meantime, the USFWS has focused on increased restrictions on habitat, claiming that since the NSO population is declining so rapidly “habitat is more important than ever.” The fallacy of this concept is that there are already countless acres of suitable NSO habitat that is devoid of any NSO’s because of the presence of barred owls. Any new habitat that is created or set aside will be occupied by barred owls and therefore of no use to the NSO. This fixation on “protecting” habitat has actually stymied much needed fuels reduction and restoration work needed on our federal lands to reduce fuel loads and the risk of stand-replacing catastrophic wildfire, leading to the loss of spotted owls and habitat.

In the ten years since the barred owl was recognized as a significant threat to the NSO, little has actually been done by the USFWS to address this threat. The USFWS has access to a large body of research that NSO populations can be recovered through active forest management and an aggressive effort to eradicate barred owls. Yet the agency appears perfectly content to continually impose new forest management restrictions that will have no impact on stopping the decline of the NSO population and only serve to show they are doing something. This fixation on habitat protection in lieu of addressing the barred owl threat may even result in the loss of habitat to wildfires.