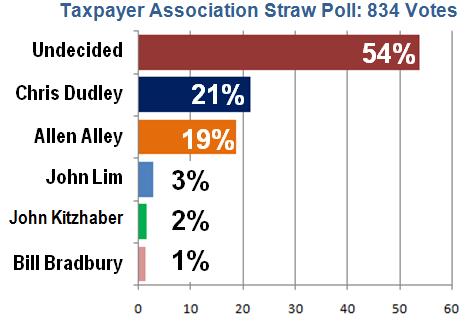 The largest straw poll in Oregon was conducted by the Taxpayer Association of Oregon with over 830 people responding. The poll shows the voter opinion of what Oregon grassroots taxpayer activist think of the governor candidates. The results of this taxpayer poll show a massive amount of voters are still undecided which makes this one of the most open ended and competitive races in modern memory.

The straw poll was sent to Taxpayer Association members and supporters around the state. Because it is not limited to a specific political party it gives a glimpse to what is in the mind of taxpayers beyond the Primary. There were seven write-in votes not factored in as only one received more than one vote which was Sen. Jason Atkinson at two votes.

The survey also included 13 other survey questions to be announced in the upcoming weeks.