Salem, OR – Following adjournment of the 78th legislative assembly, Senate Republicans decried the highly partisan session that resulted in dozens of costly new mandates on Oregon families and small businesses.

“Before the session began, Democrat leaders made it clear they would take an “our way or the highway” approach to passing a slew of expensive new laws benefitting special interests,” explained Senator Chuck Thomsen (R-Hood River). “First off the block was the Clean Fuels mandate that will raise the price of gas for Oregonians by 19 to 30 cents or more. They chose their pet environmental project over a transportation package that would have given us tangible improvements to our roads and bridges. Oregonians lost big time this session.”

Senate Republicans pushed for full funding of education, a transportation package to invest in critical infrastructure projects, and the protection of small businesses from costly mandates that will shutter shops and raise consumer prices. Democrats refused to deliver for Oregon priorities, intentionally underfunding K-12 education and choosing pet partisan policies over real investments for Oregon’s working families and small businesses.

“The woeful underfunding of K-12 education is perhaps the biggest travesty of this session,” explained Senator Tim Knopp (R-Bend). “With over $1 billion in additional revenue from a growing economy, Democrats had an opportunity to invest in smaller class sizes, more school days and new teachers. Instead, they directed extra funding to pad agency budgets, leaving Oregon children and teachers in the dust.”

In addition to underfunding education, Democrats passed numerous job-killing bills that harm small businesses, including a new paid time off mandate. Requiring employers to pay employees for time off will cost businesses nearly $1 billion over a two-year period. Senate Democrats refused to protect small businesses with fewer than 50 employees that will be unduly burdened by the cost of paying for and covering last-minute shift changes when employees take time off.

The 2015 legislative session concluded on July 6, with the end of session characterized by the same partisan tone at the start. Senate Democrats fast-tracked harmful policies that will cost Oregonians and further burden and already strapped budget in upcoming biennia.

“Sadly, Sine Die was the best thing that happened for Oregonians this session,” said Senate Republican Leader Ted Ferrioli (R-John Day). “The Democrats’ appetite for expensive programs that don’t align with Oregon priorities is astonishing. We need realignment in the legislature-it’s time to put Oregon’s schoolkids, working families, and small businesses first. We hope in future session Democrats will choose to work across party lines for a stronger economy and a brighter future for Oregon.”

Salem, OR – After one of the most contentious and partisan legislative sessions in recent history, House Republicans today joined their colleagues in closing out the 2015 Legislative Session. Facing overwhelming odds as the minority party, House Republicans united together to block a gas tax increase and fight for Oregon families and employers, local school districts, struggling rural communities, and more transparency and oversight in government.

Instead of starting the 2015 Legislative Session with a clean slate to address the needs of the state, Democrats began the session with an agenda to complete “unfinished business” by immediately passing partisan legislation to radically reform class-action lawsuits, mandate universal voter registration, and make permanent the controversial and tainted Low Carbon Fuel Standard.

Democrats continued their partisan politics throughout the remainder of session, passing flawed, divisive bills on party-line votes and killing commonsense compromises and alternatives proposed by House Republicans. When faced with a threat from Democrats to raise the gas tax after passing the flawed LCFS program, House Republicans united together to block any gas tax increase from moving forward. House Republicans also attempted to pull 31 bills to the floor to increase economic development, provide critical tax relief to families, veterans and local employers, and increase transparency in government. House Democrats killed all 31 bills.

One of the highlights spearheaded by House Republicans this session included a meaningful, comprehensive ethics reform package that sought to increase accountability, oversight and transparency in both the executive and legislative branches. Despite strong public support for real ethics reform, the package of six bills, which included a whistleblower protection measure and a bill to establish a formal impeachment process, was killed by Democrats in both the House and Senate.

House Republicans also protected the kicker tax rebate; passed safety and oversight rules and regulations for the legal sale of marijuana; passed legislation to protect crime victims and increase penalties for individuals who commit crimes; and, passed measures to increase economic development and bring stable, family-wage jobs to the state.

House Republicans are looking forward to returning home to their respective districts, where they will hold town halls and other gatherings to meet and take questions from constituents. Town hall meeting details will be released once finalized. 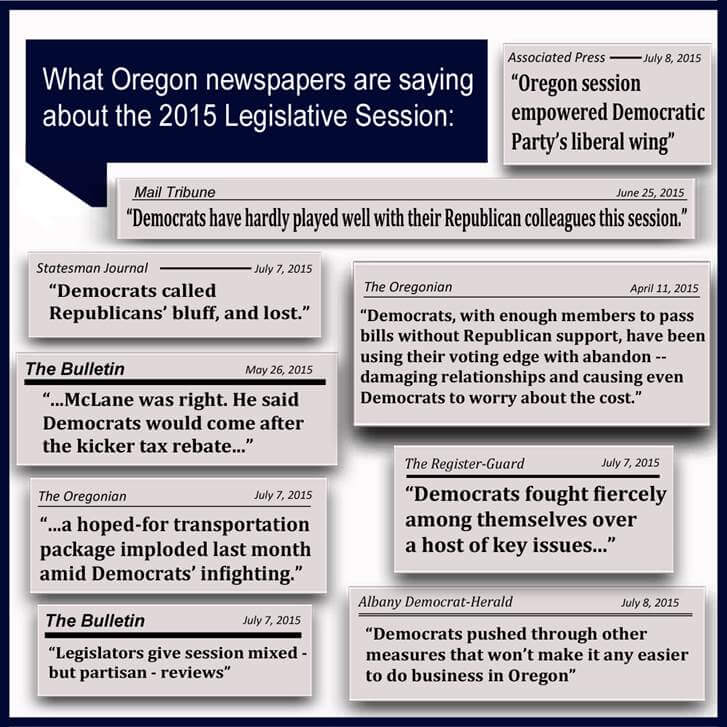