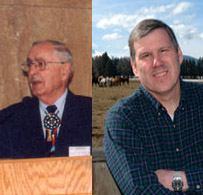 Tough year for Republicans is only getting more bizarre with Senator Ben Westlund switching parties (although that may be a good thing). Even Senator Smith shook things up this week with his Iraqi floor speech — a speech that I recently learned was not intended to create a much of a stir as it did. . Today former Republican Governor Vic Atiyeh laid out his goals for the Republican Party in an opinion piece in the Oregonian today. Here is Vic Atiyeh’s four points.

1. First, we need to focus on the center of the electorate. The candidate closest to the center wins most elections.
2. Second, ideology is not a substitute for policy. Republicans need policy ideas to go along with our core principals to address the everyday economic and social concerns facing Oregonians. Too often, our candidates rely on the ideological slogans of “smaller government” or “traditional values” to define our answers to complex problems.
3. Third, Republicans must invest more in building a quality team of candidates.
4. Fourth, focus on Washington County. Republicans will never win a statewide office and won’t control the Legislature if we can’t win in Washington County.

Is Atiyeh’s four-point plan the future for Republicans? Has anyone else offered anything else? We report, you decide!