The State of Oregon’s September 2015 Economic and Revenue Forecast was released today. The personal ‘kicker’ will be $402 million.

The Oregonian reported “Oregon taxpayers will receive a smaller-than-expected ‘kicker’ tax rebate,” with a “median payout of $124” – “The May forecast had predicted a $473 million kicker with a median payout of $144.” The Portland Tribune reports that State Economist Mark McMullen “said tax collections dipped more than anticipated in late spring and the result is the smaller amount.”

In addition to the full revenue forecast, the state’s Oregon Office of Economic Analysis also produced a slide presentation that included this chart showing how much Oregon taxpayers can expect from the ‘kicker’: 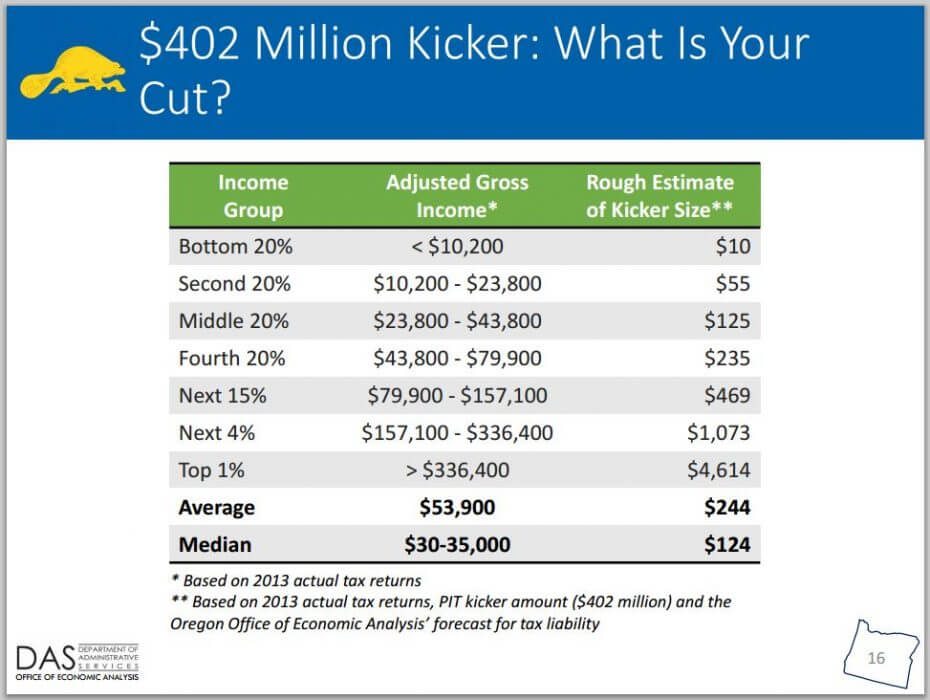 The ‘kicker’ is no longer an actual check – it will be ‘returned’ in the form of a credit against 2016 Oregon income taxes. The change is described in the Portland Tribune “Unlike the practice for the past two decades, the excess — known as the ‘kicker’ — will be returned to individual taxpayers in the form of a credit against the following year’s tax bills. Lawmakers in 2011 ended the practice of mailing checks directly to taxpayers that was started in 1995.”

“Today’s revenue forecast shows that Oregon’s economy is holding steady but not yet reaching its full potential. Our unemployment rate is still higher than the national average and recent reports show that 2 out of 5 Oregon adults are neither working nor looking for work. Without a strong and stable workforce, Oregon will continue to face an uncertain and volatile economic future.

“The best news out of today’s revenue forecast is the $402 million kicker that will provide much-needed tax relief for working Oregonians. The people of Oregon have shown time and again that they want the kicker to remain in the Oregon Constitution as a limit on how much money the state government can spend when revenues exceed expectations. When the economy does well, Oregonians should reap the benefits, not state government.”

Salem, OR – Today, the State Economist released the final revenue forecast for the fiscal year, predicting little to no change from the May revenue forecast that indicated over $1.75 billion in additional revenue due to economic growth and recovery. Despite the additional revenue, Senate Republicans once again highlighted Democrats’ unwillingness to fully fund K-12 education and support small businesses to ensure a strong economy in the future.

“This ‘status quo’ revenue forecast once again proves that while Oregonians enjoy $1.75 billion in new revenue, Democrat leaders refuse to use that money to fully fund Oregon schools,” said Senate Republican Leader Ted Ferrioli (R-John Day). “This past session, Democrats deliberately underfunded K-12 education by hundreds of millions. As students return to school next month, they won’t see smaller class sizes, longer school years or more programs. We should be sending additional revenue to our kids and classrooms where it belongs.”

Senate Republicans argued a stagnant revenue forecast indicated the Democrat-controlled legislature’s inability to strengthen the economy and create new jobs. In the 2015 session, Democrats passed numerous anti-small business mandates that will lead to layoffs, shuttered shops and higher prices for consumers across the state.

“The only silver lining from this revenue forecast is Oregonians will see much-needed tax relief from the constitutional ‘kicker’,” explained Senator Tim Knopp (R-Bend). “With a fiscal cliff looming on the horizon, Democrat leadership needs to step up and put the additional revenue from this forecast toward schools and critical services-not bloated bureaucracy-without taking the kicker away from Oregon families.”

“The kicker should go directly to the citizens to spend, save, invest or dispose of as they see fit,” explained Senator Ferrioli. “If the legislature had established the kicker as a stimulus check, Oregonians could receive checks in the mail as early as next month. The economy needs stimulation now, not months down the road.”