CNN chose a different approach for the Democratic debate than for the Republican debate they moderated. In the GOP debate, CNN’s Jake Tapper spent much of the debate trying to pit one candidate against another. For the Democratic debate, they went with a softer, cupcake approach. Bizpac Review reported CNN’s Anderson Cooper said “I’m always uncomfortable with that notion of setting people up in order to kind of promote some sort of a face off,” which Bizpac Reivew noted was “contradicting the entire format of the Republican debate CNN hosted.” The cupcake format then allowed pro-Dem media like the NY Times Editorial Board to gush “Civility was a big winner on Tuesday night” in the liberal media echo chamber.

There was controversy leading up to the debate over Democratic National Committee Chair Debbie Wasserman Schultz who “alone made the decision to set the so-called debate exclusivity rule, which bars the Democratic presidential candidates from participating in more than six debates.” The debate limit seems designed to pave the way for a smooth coronation of Hillary Clinton – and was criticized by DNC vice-chairs as well as by fellow presidential candidates Bernie Sanders and Martin O’Malley.

Regardless of controversy, the debate took place and what stood out was the lack of diversity in the Democratic presidential field. It was in stark contrast to the Republican presidential field that includes “two Hispanic senators, a retired African American neurosurgeon and… an Indian American governor” as well as “former Hewlett-Packard chief executive Carly Fiorina.” Some memes on Facebook have been pointing out the contrast. 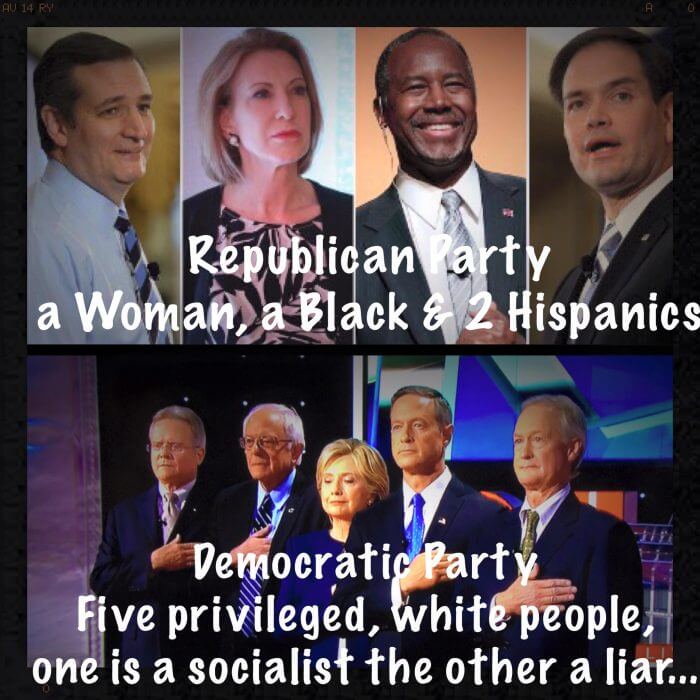 Most of the liberal media were too busy fawning over Hillary Clinton to notice the lack of diversity, but apparently it didn’t escape Spanish-language news anchor Jorge Ramos who noted to DNC Chair Wasserman Schultz “When I was watching the debate, what I was thinking was the Democratic Party lacked diversity. I didn’t see a Latino, or an African-American, or an Asian on that stage.”