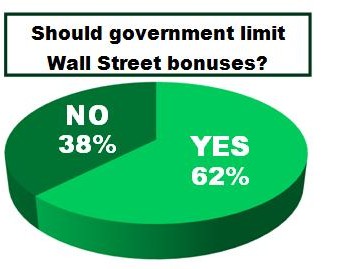 Almost a thousand Oregonians were asked whether they agree with Congress placing a limit on the amount of employee bonuses in Wall Street firms that received Federal assistance or TARP funds.

Clearly they see the need for government to oversee executive’s compensation. Only about one third felt the government’s power would be overreaching.

“Pay Czar”, Ken Feinberg, whose official title is Special Master for TARP Executive Compensation ordered five companies overseen by the Obama administration to cut cash compensation to top executives by 33%. As a result, total pay in 2010 will fall by about 15 % for 119 executives at AIG, General Motors Co., GMAC, Chrysler Group LLC and Chrysler Financial Corporation. While Feinberg only has control over companies that were bailed out, he wants to see other Wall Street companies following suit.