The North American Aerospace Defense Command (NORAD), a bi-national United States and Canadian organization that provides aerospace early warning and control for North America, will be tracking Santa Claus again this year. The Norad Tracks Santa effort is staffed with volunteers and is almost entirely paid for by the generous support of corporate licensees.

More than 1,250 Canadian and American uniformed personnel and DOD civilians volunteer their time on December 24th to answer the thousands of phone calls and emails that flood in from around the world. 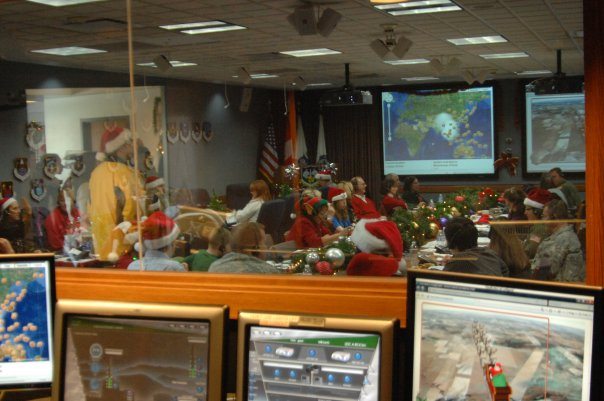 Not all calls from children are checking on where Santa is.

A large note from the NORAD Tracks Santa Center Operations Center says “Overheard at the Ops Center… Big sister wanted to add her 3-year-old brother to the ‘naughty’ list.” 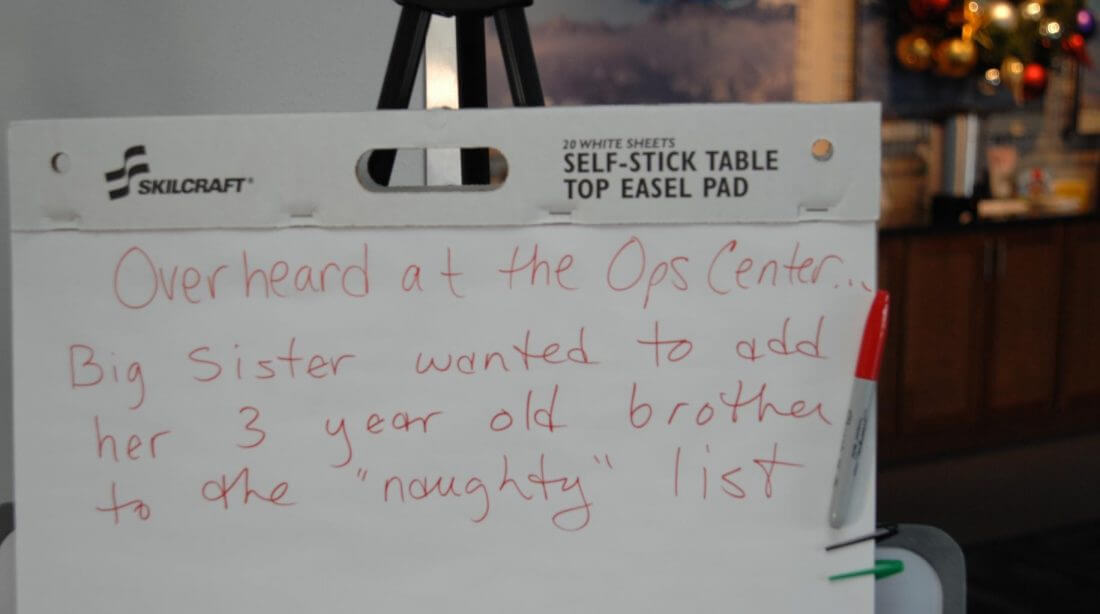 For more than 50 years, NORAD and its predecessor, the Continental Air Defense Command (CONAD) have tracked Santa’s flight.

The tradition began in 1955 after a Colorado Springs-based Sears Roebuck & Co. advertisement misprinted the telephone number for children to call Santa. Instead of reaching Santa, the phone number put kids through to the CONAD Commander-in-Chief’s operations “hotline.” The Director of Operations at the time, Colonel Harry Shoup, had his staff check the radar for indications of Santa making his way south from the North Pole. Children who called were given updates on his location, and a tradition was born.

In 1958, the governments of Canada and the United States created a bi-national air defense command for North America called the North American Aerospace Defense Command, also known as NORAD, which then took on the tradition of tracking Santa.

Since that time, NORAD men, women, family and friends have selflessly volunteered their time to personally respond to phone calls and emails from children all around the world. In addition, we now track Santa using the internet. Millions of people who want to know Santa’s whereabouts now visit the NORAD Tracks Santa website.

Finally, media from all over the world rely on NORAD as a trusted source to provide updates on Santa’s journey.

It all starts with the NORAD radar system called the North Warning System. This powerful radar system has 47 installations strung across Canada’s North and Alaska. NORAD makes a point of checking the radar closely for indications of Santa Claus leaving the North Pole every holiday season. The moment our radar tells us that Santa has lifted off, we begin to use the same satellites that we use in providing air warning of possible missile launches aimed at North America.

These satellites are located in a geo-synchronous orbit (that’s a cool phrase meaning that the satellite is always fixed over the same spot on the Earth) at 22,300 miles above the Earth. The satellites have infrared sensors, meaning they can see heat. When a rocket or missile is launched, a tremendous amount of heat is produced – enough for the satellites to see them. Rudolph’s nose gives off an infrared signature similar to a missile launch. The satellites detect Rudolph’s bright red nose with no problem.

The third system we use is the SantaCam. We began using it in 1998 – the year we put our Santa Tracking program on the Internet. NORAD SantaCams are ultra-cool, high-tech, high-speed digital cameras that are pre-positioned at many places around the world. NORAD only uses these cameras once a year – on 24 December. We turn the cameras on about one hour before Santa enters a country then switch them off after we capture images of him and the Reindeer. We immediately download the images onto our web site for people around the world to see. SantaCams produce both video and still images.

The last system we use is the NORAD jet fighter. Canadian NORAD fighter pilots, flying the CF-18, take off out of Newfoundland and welcome Santa to North America. Then at numerous locations in Canada other CF-18 fighter pilots escort Santa. While in the United States, American NORAD fighter pilots in either the F-15s, F16s or F-22s get the thrill of flying with Santa and the famous Reindeer – Dasher, Dancer, Prancer, Vixen, Comet, Cupid, Donner, Blitzen and Rudolph. Even though Santa flies faster than any jet fighter (Santa actually slows down for us to escort him), all of these systems together provide NORAD with a very good continuous picture of his whereabouts.

How long has NORAD been tracking Santa?

NORAD’s predecessor, the Continental Air Defense Command (CONAD), began tracking Santa in 1955. NORAD replaced CONAD in 1958 and took over the mission of tracking Santa’s flight around the world, and they have been tracking Santa every year since!

Why does NORAD track Santa?

Twenty four hours a day, 365 days a year, NORAD tracks airplanes, missiles, space launches and anything else that flies in or around the North American continent, while also completing some other very important missions. While the tradition of tracking Santa began purely by accident, NORAD continues to track Santa. We’re the only organization that has the technology, the qualifications, and the people to do it. And, we love it! NORAD is honored to be Santa’s official tracker!

When will Santa arrive at my house?

NORAD tracks Santa, but only Santa knows his route, which means we cannot predict where and when he will arrive at your house. We do, however, know from history that it appears he arrives only when children are asleep! In most countries, it seems Santa arrives between 9:00 p.m. and midnight on December 24th. If children are still awake when Santa arrives, he moves on to other houses. He returns later…but only when the children are asleep!

What route does Santa travel?

Santa usually starts at the International Date Line in the Pacific Ocean and travels west. So, historically, Santa visits the South Pacific first, then New Zealand and Australia. After that, he shoots up to Japan, over to Asia, across to Africa, then onto Western Europe, Canada, the United States, Mexico and Central and South America. Keep in mind, Santa’s route can be affected by weather, so it’s really unpredictable. NORAD coordinates with Santa’s Elf Launch Staff to confirm his launch time, but from that point on, Santa calls the shots. We just track him!

Indeed! Santa visits all homes where children believe in him.

How can Santa travel the world within 24 hours?

NORAD intelligence reports indicate that Santa does not experience time the way we do. His trip seems to take 24 hours to us, but to Santa it might last days, weeks or even months. Santa would not want to rush the important job of delivering presents to children and spreading joy to everyone, so the only logical conclusion is that Santa somehow functions within his own time-space continuum.

Is there a Santa Claus?

Mountains of historical data and more than 50 years of NORAD tracking information leads us to believe that Santa Claus is alive and well in the hearts of people throughout the world.

How old is Santa?

It’s hard to know for sure, but NORAD intelligence indicates Santa is AT LEAST 16 centuries old.

Based on flight profile data gathered from over 50 years of NORAD’s radar and satellite tracking, NORAD concludes that Santa probably stands about 5 feet 7 inches tall and weighs approximately 260 pounds (before cookies). Based on fighter-aircraft photos, we know he has a generous girth (belly), rosy cheeks from sleigh riding in cold weather, and a flowing white beard.

How does Santa get down chimneys?

Although NORAD has different hypotheses and theories as to how Santa actually gets down the chimneys, we don’t have definitive information to explain the magical phenomenon.

Do your planes ever intercept Santa?

Over the past 50 years, our fighter jets (F-16s, F-15s, F-22s and CF-18s) have intercepted Santa many, many times. When the jets intercept Santa, they tip their wings to say, “Hello Santa! – NORAD is tracking you again this year!” Santa always waves. He loves to see the pilots!

Does NORAD have any pictures of Santa taken from your planes?

Our fighter pilots love to take photos of Santa. We also have NORAD Santa Cams in space which take video of Santa as he flies round the world. These videos appear almost every hour on December 24th at www.noradsanta.org.

Does NORAD have any statistics on Santa’s sleigh?

NORAD can confirm that Santa’s sleigh is a versatile, all weather, multi-purpose, vertical short-take-off and landing vehicle. It is capable of traveling vast distances without refueling and is deployed, as far as we know, only on December 24th (and sometimes briefly for a test flight about a month before Christmas).

Where is Santa right now?

Santa is at the North Pole, where he lives with Mrs. Claus and the elves who make toys and take care of the reindeer year round! Each year on December 24th, Santa and his reindeer launch from the North Pole very early in the morning for their famous trip around the world. The minute they launch, NORAD starts to track him! Come back to this website on December 24th and you can track Santa along with NORAD!

I would rather talk to someone at NORAD to find out where Santa is located. Is there a number I can call?

Yes! The NORAD Tracks Santa Operations Center is fully operational beginning at 3:00a.m. MST on December 24th. You can call 1 877 HI-NORAD (1 877 446-6723) to talk directly to a NORAD staff member who will be able to tell you Santa’s exact location. Operators are available until 3:00a.m. on Dec. 25th to answer your calls!

Can I send an email to NORAD to find out where Santa is located?

Yes! On December 24th, you can send an email to [email protected] A NORAD staff member will give you Santa’s last known location in a return email. You can also track Santa on your mobile phone, through the official Windows 8 app, and you can even chat live with a NORAD operator to find out Santa’s location!

Has Santa ever crashed into anything when he was flying around the world?

Santa has been flying for centuries without hitting anything. He must be a great pilot!

Besides tracking Santa, what does NORAD normally do?

NORAD is a bi-national U.S./Canadian military organization responsible for aerospace warning, aerospace control, and maritime warning in the defense of North America. NORAD provides warning of impending missile and air attacks, safeguards the air sovereignty of North America, and maintains airborne forces for defense against attack. NORAD performs this important mission 24 hours a day, 365 days a year. www.norad.mil or follow us on Facebook at facebook.com/noradnorthcom.

How many people support this effort, and are they active duty military personnel?

More than 1,250 Canadian and American uniformed personnel and DOD civilians volunteer their time on December 24th to answer the thousands of phone calls and emails that flood in from around the world. In addition to the support provided by our corporate contributors to make this program possible, NORAD has two lead project officers who manage the program.

How much money is spent on this project?

The NORAD Tracks Santa program is made possible by volunteers and through the generous support of corporate licensees who bear virtually all of the costs.