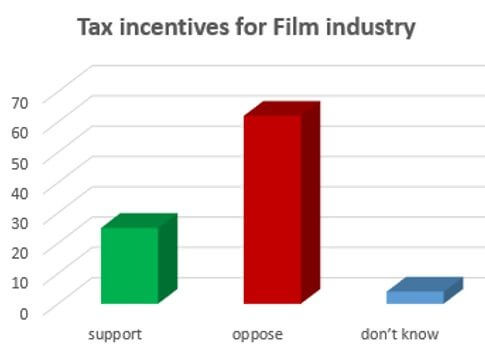 By Taxpayer Foundation of Oregon
OregonTaxNews.com

A Taxpayer Foundation poll of Oregonians found that the Oregon film tax credit program has strong disfavor with the public and is one of the most disliked issues of the nearly two dozen issues we surveyed Oregonians on. This comes at a time when the 2016 Legislature has been holding hearings on Senate Bill 1578 which increases Oregon’s film tax credit cap from $10 million to $14 million.

Only 25% of Oregonians said they favor the current film tax credit program compared to 62% that oppose — that is more than double the number of opposition.

Supporters say the Oregon Film Tax Credit program brings jobs and tourism. Opponents say it is a waste of taxpayer dollars and does nto deliver on those promises.

The Foundation asked the question where both viewpoints were represented, “Oregon spends $10 million a year in tax incentives and rebates for Hollywood film investors to work in Oregon. Supporters say these tax incentives help attract filming jobs and tourism. Opponents say taxpayers shouldn’t be giving $10 million in tax breaks to wealthy film producers who are not creating long term jobs. Do you support or oppose tax subsidies for film companies and investors?”

The telephone poll was conducted last year of 300 voters. Here are the details.