As some of you may know, I have been involved with Avva Cigars and Wine’s fight with the Oregon Department of Health and Services (DHS) over whether Avva should have been allowed the “smoke shop exemption” as accorded in the statute.

span> I have posted before, the law and the application of the exemption. I now bring new evidence that should alarm anyone who is concerned about liberty, freedom and who are against State control.

On my radio show on Monday, from noon to two, I will be reading this evidence along with playing sound files that show a willful denying of the exemption by 4 women who work for DHS, and how that denial has been unlawfully applied and the appeal process by Avva has been intentionally delayed or strategically denied by DHS employees who have used at the least, improper strategy.

See in the photo below, in the middle, an email from Kylie Menagh of DHS in which she brags about how they can delay the process (Miss Menagh refers to herself in various emails as: Tobacco Prevention Coordinator, and in others as: MPH, Health Promotion and Chronic Disease Prevention Program). You will need to click on these images to better see the emails: 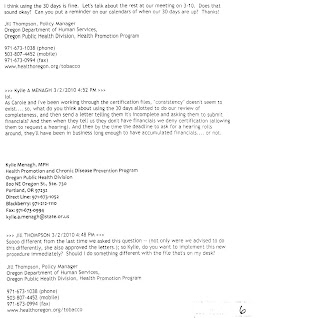 In that same email photo you can see the back and forth emails where these DHS employees begin a process of making up policy and procedure “on the fly” as they did not have any policy or procedure set down to follow.

In another email, Miss Jill Thompson of DHS states that she couldn’t even find Avva Cigars until she “followed her nose” so to speak, when she was on an outing with her “BF and Son” (which by the way, the smoke she smelled was from the Cigarette smokers area at the front door of the Mall, not from Avva). You will need to click on these images to better see the emails: 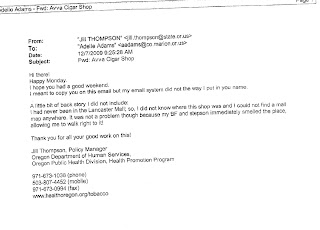 Here is where the “cover up” gets interesting. On Dec. 7, 2009, the decision was made that Avva would be “indefinitely denied” as you can see from the photo of the email below. You will need to click on these images to better see the emails: 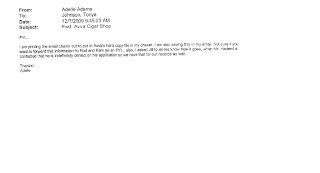 Avva was never informed of the “indefinite denial” but was told it’s application was denied on Dec. 10, 2009.

On Dec. 18, 2009, DHS employees began to attempt to conceal their activities by removing all communication regarding Avva’s application process to “telephone communication only”. Why would they do this? Well as you can see by the email below, my radio show had started quite a stir with my listeners who began calling DHS, Marion County and their representatives. One of those representative, Matt Wingard, and his assistant Dawn Phillips even went so far as to begin their own investigation into the matter and to begin to attempt to contact these employee’s own boss, Dr. Bruce Goldberg, head of DHS. Read the email. You will need to click on these images to better see the emails: 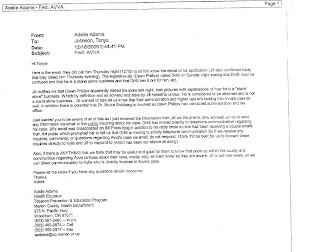 By Dec. 30, 2009, Avva requested an opportunity to submit additional material to support it’s case to appeal the denial. Avva was not aware of the “indefinite denial” as these were again, internal emails. Avva did not receive a response on this additional information until April 7, 2010. The case is now before a DHS hearing, conducted by DHS. (I bet that will be “objective”?)

Tomorrow, on my radio show, I will go into further detail, the “why” DHS denied Avva’s exemption, play audio from the Senate floor of the Legislature as Sen. Prozanski and Sen. Walker actually describe how a “smoke shop located in a mall setting would be exempted” and how DHS employees willfully and purposely have “bent the law” to their own agenda that was best stated by Miss Menagh when she told the owner of Avva (and the owner of Rich’s Cigars in Portland): “my mission is to end ALL smoking in Oregon and will do what I can to achieve that goal”.

THAT my friends, is what “state control” looks like. Not “state” as in the State of Oregon, but “state” as in “socialist state”. A “state” where one’s personal and business rights are trampled on by “state” employees who have the power, not voted on by the people, but power handed to them by their employer, The State of Oregon. This is how quickly freedom can be squelched!