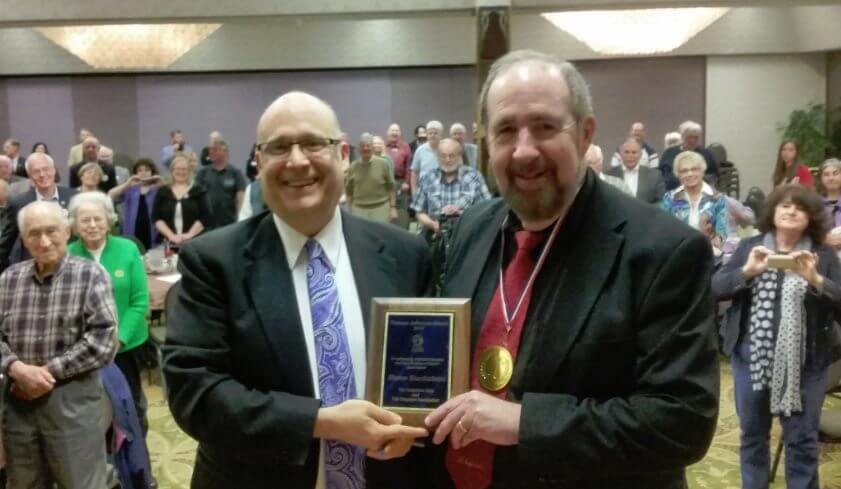 Steve Buckstein wins 16th annual Thomas Jefferson Award at the Executive Club on May 4th 2016.  The award is from the Taxpayer Association of Oregon and the Oregon Executive Club.

Steve Buckstein serves as Senior Policy Analyst for Cascade Policy Institute, which he founded in 1991 and where he served as president from 1991 until 2004. In 2001, he received the distinguished Roe Award from the State Policy Network, recognizing his leadership among America’s free market think tanks and his decade of achievement. Cascade is dedicated to promoting individual liberty, personal responsibility and economic opportunity.

Prior to founding Cascade, Buckstein coordinated the 1990 Oregon campaign for a citizens’ initiative (Measure 11) to provide educational tax credits to every student in Oregon so they could choose public, private, religious or home schooling. Although Measure 11 failed in 1990, Buckstein translated the 1990 loss into a series of wins for Oregon students and a quarter century of progress towards school choice in Oregon. Throughout the 90s Buckstein helped to fuel the school choice movement by assembling a taskforce, crafting legislation, and lobbying in Salem for three legislative sessions. Oregon’s Charter School legislation passed both houses in 1999, and was signed by Governor Kitzhaber. Today more than 28,000 students attend 125 charter schools in Oregon.

On the heels of this victory, Buckstein helped to found the Children’s Scholarship Fund in 1999 which provided scholarships to more than 500 children from low income families to attend the private school of their choice for four years. In 2009 Cascade won a grant from the Friedman Foundation for Educational Choice, helping to scholarship more students.

At the state level, Buckstein continues to serve the taxpayers in numerous policy issues. In 2007 Governor Ted Kulongoski appointed him to represent taxpayers on the Task Force on Comprehensive Revenue Restructuring .
A valued and respected voice of opposition, Buckstein was appointed by Secretary of State Kate Brown in 2012 to weigh in on the opposing side of Ballot Measure 85 as part of the Explanatory Statement Committee. In 2014 he was also appointed to the Explanatory Committee in opposition to Measure 86, which failed at the polls.
Buckstein’s work and policy analysis has been integral to the passage of several key bills promoting individual liberty and the free market, as follows.

2010 lobbied and won the Home Movers bill, allowing college students like Adam Sweet to do business without burdensome restraints and licenses designed to eliminate small businesses.

2011 lobbied and won for the Open Enrollment bill, which has helped hundreds of Oregon families transfer to a school or school district better suited to their objectives.

On the near horizon, Buckstein is working to drive new legislation forward promoting Education Savings Accounts, which has succeeded at least partially in Nevada and four other states. Much like the uphill climb on charter school legislation, he is prepared to make progress through multiple legislative sessions as freedom gains momentum and ultimately succeeds. Buckstein has never allowed small legislative or ballot measure defeats define whether liberty will ultimately win the day. His is the long view towards success, knowing that every great idea and liberty worth defending is worth promoting by every possible means.

For 25 years, Steve Buckstein has promoted individual liberty, personal responsibility and economic opportunity in the day to day work at Cascade. He provides state and national leadership in several policy areas, including tax and budget issues, health care reform, education reform and Social Security reform. While he brings a wealth of brilliance, analysis, and action to each these critical policy areas, his lifetime passion and his proudest achievement continues to be his work on school choice.