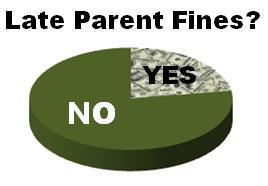 Some Oregon schools have implemented a policy that fines parents when they are more than 10 minutes late in picking up their child from school. Readers were asked if they agree with the policy. By a 4 to 1 ratio the answer was a resounding “no”.

But, is the problem with the schools or with the parents, and who should be responsible for the children?

The Woodmere school found out one day after the fine policy was implemented.

Excuses for late pick up grew to be more and more common. Parent scheduling a doctor appointment at the same time as pickup knowing the school would watch their child for the hour till they were done. Another was simply sleeping. Some children waiting for sometimes an hour not knowing what was happening and the school unable to reach the parents.

Would the fines make a difference? The Woodmere School in Portland found out last year. The day after they implemented the policy and notice was sent home to the parent there was not one late pickup.