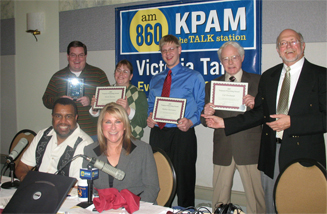 The 2007 Taxpayers Awards was a huge hit as over 100 people braved a snow storm to attend the awards being broadcast live on KPAM 860AM Victoria Taft show with comedian Mike Jenkins at the Sheraton Airport. The big winners were Oregonians In Action (Ross Day, Dave Hunnicutt and Bill Moshofsky) for winning the Thomas Jefferson Award for their double property rights victory in 2006 . Newt Gingrich and Rudy Giuliani topped the statewide Presidential straw poll. RESULTS BELOW:

Wiener Politician Award Winner:
Superintendent Susan Castillo: State School Superintendent Castillo has a record of opposing charter schools. With two days before school started, Castillo threatened to yank the funds for the approved charter school, the Oregon Connections Academy. This sent over 500 students and parents into chaos. Thanks to huge public support for the school and public pressure Castillo changed her mind.

Pork Barrel Project Winner:
Portland’s Arial Tram: Lack of oversight caused costs to triple from $15 million to an astonishing $55 million. The public/private tram moves staff from one office to another office up a small hill, saving them 10 minutes of traffic time.

Bureaucratic Bungler Winner:
The “Learn Less, Score High” Test: The Federal Government has faulted Oregon’s Dept. of Education for setting 3rd, 4th & 5th grade tests too low, which artificially raises Oregon’s test scores. Thousands of kids who passed may not have passed after all. Also other grades were being reviewed as testing too high.

Golden Schnoz Award Winner:
Portland Why-Fi? Portland is getting into the private Wi-Fi broadband business by using as much as $16 million of taxpayers’ dollars to make a deal with a private company to provide free Wi-Fi service to the entire city. This service is something which many companies provide without involving public tax dollars.