It made national news!!!
From Fox News report:

“Oregon county officials have apologized after health inspectors told a 7-year-old girl that she can’t run a lemonade stand without a $120 temporary restaurant license. Jeff Cogen, chairman of the Multnomah County Board of Commissions, told FoxNews.com that he apologized to the mother, Maria Fife, and is now turning his attention to changing the rules. “Our health department what they were trying to do, I understand…I just feel like we have to be able to distinguish between a 7 year old, who is selling lemonade and trying to learn about business and someone who actually has a business,” Cogen said. Julie Murphy of Oregon City opened a lemonade stand at Last Thursday, a monthly art fair in Northeast Portland, The Oregonian reported. But when Julie couldn’t provide a license when asked, they were told to either leave or face a $500 fine…“I offered her my apologies with what happened with her daughter. As I told her, I have kids who sell lemonade,” Cogen said.”

Which brings us to remember an old cartoon (see below) 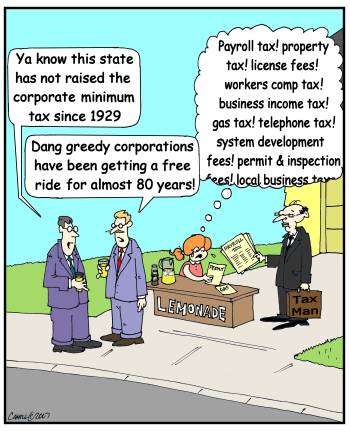