Pastor who won AR-15 in raffle: Will Lake Oswego police chief now enforce the anti-gun law he pushed to have pass?

Oregon SB 941 became law in May 2015. This anti-gun legislation, “the Oregon Firearms Safety Act, adds the requirement of a background check for firearm transfers between private parties to existing law.”

Grant County Sheriff Glenn Palmer opposed anti-gun SB 941, and during his testimony back in April 2015 expressed the concern that SB 941 was “going to make criminals out of” “law-abiding citizens who want to pass a gun off to somebody.”

A little over a year later, it now appears Sheriff Palmer was right. Reverend Jeremy Lucas of Lake Oswego may be one of those law-abiding citizens that SB 941 has made a criminal out of.

Rev. Lucas spent $3,000 of church funds to buy tickets for an AR-15 raffle in support of a girls’ softball tournament – with the intent of destroying the AR-15 if he won it. Fair enough. He would be supporting the girls going to their tournament, he would be supporting the gun manufacturer by subsidizing the purchase of one of their rifles, and he would be making a statement of conscience.

The problem came after he won the raffle, passed the background check at a local gun shop and took possession of his AR-15. That’s when it appears he ran afoul of the Oregon Firearms Safety Act.

According to the Washington Post, Rev. Lucas and his wife then “drove it to the home of a parishioner, a ‘responsible gun owner,’ Lucas said, who offered to keep the rifle locked up in a gun safe until the pastor is ready to destroy it.” As the Oregon Firearms Federation pointed out, if the Washington Post story is accurate, then that transfer of the AR-15 by Rev. Lucas to a parishioner broke the law created by SB 941. For that transfer to have been legal, there would have needed to be another background check, through a licensed firearm dealer, while both Rev. Lucas and the parishioner were present.

What Rev. Lucas appears to have done is a Class A misdemeanor (the most serious type of misdemeanor) – which is punishable by a fine up to $6,250 and/or up to 1 year imprisonment.

Rev. Lucas is the pastor at a church in Lake Oswego. If the apparently illegal firearm transfer took place in Lake Oswego, then it presents an opportunity for Lake Oswego Police Chief Don Johnson to enforce a law he pushed to have passed. 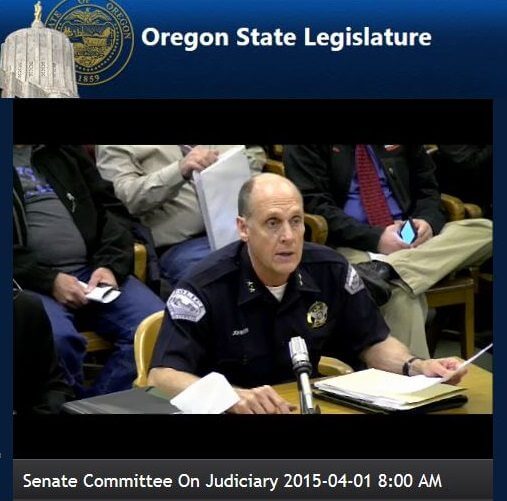 It will be interesting to see if Chief Johnson is the kind of police chief who enforces laws he pushes for.

“Lake Oswego Police Chief Don Johnson told The [Lake Oswego] Review on Saturday that after an initial ‘query,’ the LOPD has passed complaints about Lucas to the OSP, which is responsible for deciding whether to conduct an investigation into accusations that the Oregon Firearms Safety Act was violated. ‘I have discussed the matter with the Oregon State Police and am coordinating follow-up with that agency,” Johnson said, adding that “neither the Lake Oswego Police Department nor the Oregon State Police can comment on ongoing queries of this nature.'”

KOIN/AP: Pastor who won AR-15 may have violated Oregon law