All blogs (liberal, conservative, official news sites) are forced to protect themselves from trolls in order to protect free speech and quality discussion.

Oregon Catalyst is “is a place for conservative Oregonians to gather and share news, commentary, and gossip.”

We don’t have the staff to monitor all the comments, and we’ve tried to allow freedom of speech and lively discussion as much as possible. That has to be balanced with providing a place where Oregon conservatives can discuss, comment and share ideas without being attacked by trolls. We also have an interest in promoting civil, useful and productive discourse.

Trolls will be banned

Effective immediately, trolling will be considered disruptive behavior and as such will result in banning from Oregon Catalyst. 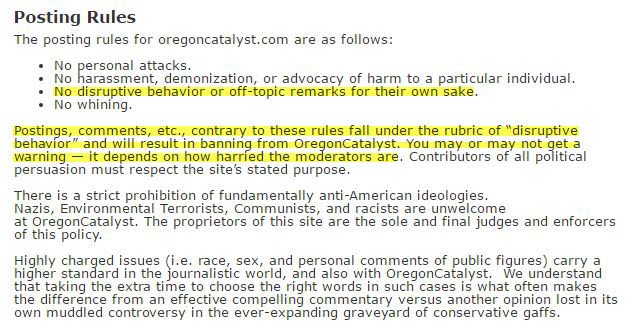 As noted in our long-standing Posting Rules, “comments, etc., contrary to these rules fall under the rubric of ‘disruptive behavior’ and will result in banning from Oregon Catalyst. You may or may not get a warning — it depends on how harried the moderators are.”

In her 2010 ‘Blogging the Political: Politics and Participation in a Networked Society’, Antoinette Pole defines trolls as “individuals who attempt to thwart discussion on blogs that they are philosophically or ideologically opposed to.”

Trolls exhibit some or all of these attributes/behaviors: