Are Oregonians safer from crime today?
By Oregon Anti-Crime Alliance

The title of this article sparks the questions of, “safer than when?” and “measured by what standard?” Let’s start with the “standard” first.

Measured by what standard? Index Crime

Since the 1930s, the FBI has been keeping track of “index” crimes. Every year, local, state, and national law enforcement agencies report their jurisdictions’ crime statistics to the FBI. The reporting is voluntary, although many states have passed laws requiring the submission of the data. Index crime is the standard normally used to measure whether crime is going up or down. There are 7 index crimes broken down into violent and property crimes.

The time period one looks at determines the answer to this question. There have been many articles written in the last few years indicating that crime is down all around the country. These articles look at crime over the last 20 or 25 years. For Oregon, if one makes the comparison from 1985 to 2008, then crime is down dramatically. It gradually dropped from 1985 to 1995, and then it dropped dramatically after that. The chart printed below shows this 10-year gradual decline from 1985 to 1995, and then a 13-year dramatic decline in the violent crime rate. So…looking at just this part of the chart, the conclusion is that violent crime is down in Oregon – a good thing.

The fair summary for the 50-year period is that Oregon’s violent crime rate rose dramatically for about 25 years and then dropped significantly for 25 years but hasn’t come close to the low violent crime rates of the 1960s. There is still much work to do to make us all safer. One additional note, the property crime trend matches fairly closely the violent crime trend discussed above and shown in the chart below. 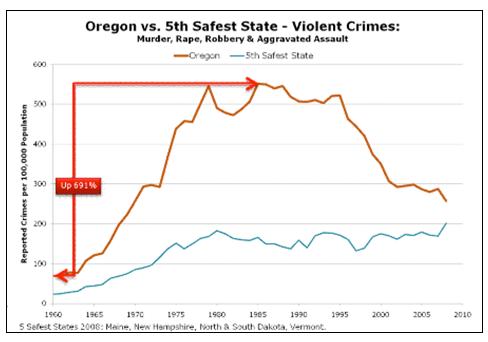 What caused the violent crime drop of the last 20 years in Oregon?

Was it imprisonment, demography, the booming economy, or something else that caused the crime drop? There is little agreement among experts about what caused this drop, and no consensus about what the future will hold. Let me just offer a brief observation on the incarceration issue. In 1994, the people of Oregon passed mandatory minimum sentences for 16 violent crimes, and the legislature added other mandatory minimum sentences for other violent crimes after that. The dramatic Oregon violent crime drop coincides closely with the implementation of the mandatory minimum sentences that continue to today. In its 2007 Report to the Legislature, the Oregon Criminal Justice Commission stated, “Recent research indicates that incarceration significantly affects crime rates.” They explain how in 1994 for every criminal incarcerated for one year roughly 29 crimes were avoided, and that this rate has dropped to fewer than 11 crimes being avoided for every offender incarcerated by 2005. They said economists call this the law of diminishing marginal returns. Stopping 11 crimes by incarcerating one offender for one year makes sense to me. Finally, in the report, they refer to a study by the Washington State Institute of Public Policy that found that for every $1.00 dollar spent incarcerating a violent offender more than $4.00 is saved.