Lake Oswego – The Chris Dudley campaign today unveiled a new radio ad featuring former Governor Vic Atiyeh. In the radio ad, Gov. Atiyeh applauds Chris Dudley for putting forth a 26 point plan to reinvent government, while expressing his disappointment in John Kitzhaber inventing a scheme with the Democratic Governors Association (DGA) to launch personal attacks (see chart below). Seeking to take the highroad, John Kitzhaber recently claimed he pulled the DGA’s attack ad, while at the same time DGA officials said they would continue to air negative ads regardless of his objections. The radio ad will begin running this week. 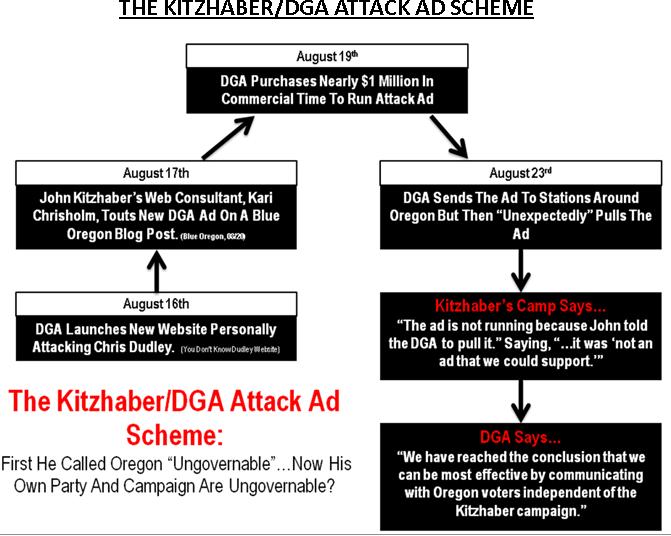 Text of the radio ad is as follows:

This is former Governor Vic Atiyeh.

Not since the early eighties, has Oregon faced the kind of serious economic challenges that we do today. Without major changes and a new vision, our quality of life is at risk.

I respect Chris Dudley for his commitment to debating the issues.

Which is why I was so disappointed when I heard about the unfair ads planned by John Kitzhaber when he was unable to counter Chris’ new vision and 26 point plan to reform our government.

It’s clear, after 24 years, the Salem insiders, including Governor Kitzhaber, are desperate to protect the status quo. The only way they can win, it seems, is to personally attack Chris Dudley.

I’m not supporting Chris Dudley simply because he’s a good person with good ideas. I’m supporting him because I think it’s time we finally turn the page on the politics of the past…it is time for a new direction.