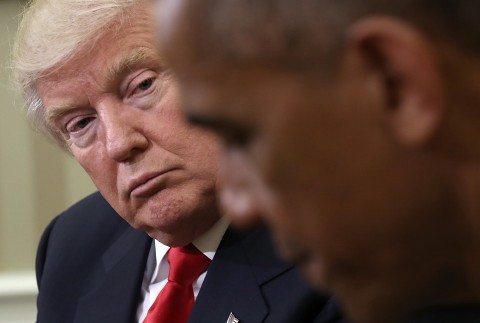 Donald Trump ran on Obama’s 2008 healthcare plan. What became the Affordable Care Act was actually Hillary Clinton’s 2008 plan. So both presidents have campaigned against this law, both presidents largely came to accept it, and both presidents’ approach to healthcare has been remarkably similar so far.

Like Obama, Trump has long supported a single payer system. He touted it in his 2000 book The America We Deserve. In the August 6, 2015 GOP debate in Cleveland, Trump explicitly defended a complete government takeover of the healthcare sector, saying to a Republican audience “it works in Canada. It works incredibly well in Scotland.” His opponents were quick to jump on that, especially Rand Paul.

Realizing that defending the British National Health Service might not be a winning position in a GOP primary, Trump did what Obama did when he instead pursued a heavily regulated private market that prevents health insurance companies from being insurance companies, a policy economists call community rating. In the wake of Clinton’s 1993 healthcare reform defeat, the last serious attempt at establishing a single payer structure, the Democrats seized upon this seemingly innocuous reform that would fundamentally change the health insurance market.

Trump did the same, but he also did so in the same irresponsible way that Obama’s 2008 campaign did, embracing this popular rule that forces insurance companies to pay for preexisting conditions while rejecting what all health economists warn must come with it: a coverage mandate. Like Obama, Trump’s response was to subsidize the market so much that people can afford the higher prices that inevitably come with this heavy handed regulation, telling 60 Minutes interviewer Scott Pelley in September 2015 “I am going to take care of everybody. I don’t care if it costs me votes or not. Everybody’s going to be taken care of much better than they’re taken care of now.” So Paley asked who’s going to pay for that. Trump said what any left-winger would say: “the government’s gonna pay for it.”

On March 2, 2016 the Trump campaign offered more details. His outline of a healthcare plan explicitly promised to keep the central regulation of Obama’s legacy. The rest of Trump’s plan involved repealing regulations that did not exist. There are no federal laws preventing states from allowing their residents to purchase plans from other states. Georgia allows its residents to buy plans from other states and has been experiencing the same skyrocketing premium increases every other state has, because Obamacare imposes community rating on all 50 states.

The core of Obamacare is not a lack of competition, and it’s certainly not the mandate of coverage. The core regulation of Obamacare that’s been driving up costs is mandating community rating. The coverage mandate is just the most efficient means of dealing with the spiraling costs that inherently come when you prevent insurance companies from engaging in basic underwriting.

Imagine what would happen to our auto insurance rates if the government mandated repairs for our cars’ preexisting conditions. Would the spiraling costs not be worse if the mandate to buy auto insurance were also removed? Would the promise to deal with these costs with government subsidies not be fiscally unsustainable?

Like the President, our own Greg Walden made a fiscally and politically dangerous promise at the annual Dorchester Conference last weekend when he said “If you’re on Medicaid today in Oregon you’ll be on Medicaid after we pass this bill.” That sounds a lot like an exaggerated promise the other side once made. I don’t blame Representative Walden for this. He’s always been a trooper for falling in line with what the GOP leadership has decided.

Repealing Obamacare could have been a simple thing, but the White House is leading Republicans in a treacherous direction. Once Trump decided to keep the core of Obamacare intact, the GOP then became doomed to repeal Obamacare only to replace it with Obama’s 2008 plan, something that would have to be far more expensive to work.

The House bill, however, is actually less expensive than what it’s trying to replace, but it won’t cover the same amount of people. This bill might pass the House, but when the CBO gives a credible, bipartisan estimate of the number of low income Americans who will go uninsured due to a loss of the ACA’s generous exchange subsidies and Medicaid expansion, at least three Republican senators will oppose it. When they do so, they might quote what Trump said in the February 2016 South Carolina debate:

There’s going to a group of people at the bottom — people that haven’t done well. People that don’t have any money that won’t be able to be care of.

Now, some people would say, “that’s not a very Republican thing to say.” Every time I say this at a rally, or even today, I said it — once, it got a standing ovation.

I said, you know, the problem is everybody thinks that you people, as Republicans, hate the concept of taking care of people that are really, really sick and are gonna die.

There are only two votes to spare in the Senate. When it’s killed in the upper chamber by at least three of the seven Republican senators that have raised Medicaid funding objections so far, Bill Cassidy (R-LA), Shelley Capito (R-WV), Susan Collins (R-ME), Cory Gardner (R-OH), Dean Heller (R-NV), Rob Portman (R-OH), and Lisa Murkowski (R-AK), these moderates will simply say the bill does not live up to what the President has promised. If the bill gets amended to retain more of the Affordable Care Act’s new entitlement spending, then the President will lose the three votes of Rand Paul (R-KY), Mike Lee (R-UT), and Ted Cruz (R-TX). Even were Trump to pry off Cruz’s bandwagon vote, the increased spending will cause the CBO to score this bill with a negative fiscal impact, making it set to expire in 10 years.

Thanks to Republican primary voters, Obamacare is here to stay. If we had a President that could lead on this issue, there are free market reforms out there worth replacing Obamacare with. This first major piece of legislation appears to be going down in flames because Republicans nominated a guy that doesn’t know what he’s doing but has sure made a career of making promises that he can’t deliver.