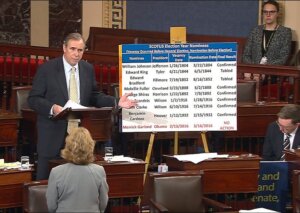 There’s little reason to expect the filibuster for legislation to hold now that it’s been removed from all judicial nominations. What’s remarkable is that this procedural rule has lasted this long.

Game theory is the formal analysis of human action when two sides have strategic interdependence in each other’s decisions.  First generalized by John van Neumann in his 1928 paper “Zur Theorie der Gesellschaftsspiele,” this analytical framework was made into a useful tool by John Nash when he came up with an elegant way to find a solution.

If you can understand the incentives of both sides and the nature of the game, the Nash Equilibrium can predict what state of affairs two opposing parties will eventually gravitate to by finding a stable outcome in which no participant can gain by a unilateral change of strategy if the strategies of the other remain unchanged. Humans don’t always behave exactly as game theory predicts, both because it’s difficult to fully capture the players’ true incentives, and some people don’t always behave rationally.

One cognitive bias that can lead both sides to deviate from a modeled course of action is the way we tend to mutually set up fairness focal points. This seems to best explain the longevity of the filibuster.

The game that probably best models the strategic choices in preserving the filibuster is the “centipede game” which would have predicted the filibuster’s demise a long time ago. Imagine a game where each player simply has to decide whether to continue or stop the game. The longer the game continues, the greater the payoff will be for both of them.

Check out the following diagram where player I goes first and alternates with player II, and player I’s payout is on top while player II’s is below (so if player I stops the game at the first round he gets 4 and player II gets 1).

The Nash Equilibrium to this game is found by backward induction. You start at the end and decide what player II would do. Clearly, player II would stop the game at the sixth round, preferring to get 128 instead of 64. Knowing this, player I will not let the game get to that point and will stop the game on the fifth round. If you follow this backward induction further you’ll see that the Nash Equilibrium is for the game to stop on the first round.

Do you see the paradox there? At every marginal stage of the game, the incentive for each player is to stop. Yet if only they could let the game continue two more moves they’d both be better off. The filibuster has lasted this long because there has been a fairness focal point in neither side blocking the Senate for routine reasons while both sides valued the rules of cloture as protection from the potential tyranny of simple majority rule.

Until Harry Reid pulled the nuclear trigger in 2013 for appellate judges, both Republicans and Democrats have valued the filibuster equally, but that destabilizing move by Reid killed the fairness focal point. Back then Jeff Merkley was pushing his majority leader to embrace the filibuster’s end, and Merkley used the filibuster this week for the purpose of killing it.

We might call this hypocrisy, but it’s not hard to understand why Merkley would value the filibuster less than Republicans. This old rule imposes friction on government action. It primarily serves to limit the expansion of federal power.

It’s now reasonable to assume Democrats will escalate further and remove the filibuster for legislation in the next round of this game. So the rational move for the GOP is to forget about passing things through reconciliation and enact what can be enacted with a simple Senate majority for the limited amount of time they still have one.