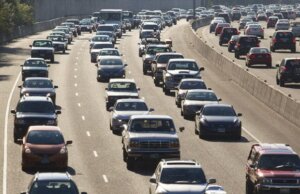 Democrats love to promise “infrastructure spending,” a phrase ripe with the logical fallacy of equivocation where a loaded term means different things. For many businesses across our state, infrastructure most readily means expanding freeway capacity in the Portland area so that our main economic engine’s own local traffic does not block the predictability of the beaver state’s exports to its significantly wealthier evergreen state neighbor to the north and to prevent this gridlock from raising shipping costs on all Oregonians. To Democrats, the same word tends to instead mean bike paths and light rail.

The bait got switched on us yesterday when the House Transportation Committee failed to schedule HB3231 for a vote, killing the most promising move toward building a bypass freeway on Portland’s westside, something like the I-205, but for the side of the city where there are more commuters, more freight, and more growth. Its sponsor, Rep. Rich Vial (R-Scholls), lamented that it was killed by what he called “pretty vehement opposition” from people trying to sell different products who worried his bill would undercut efforts to improve public transportation and bike lanes.

The Oregon Catalyst has run many articles over the years pointing out what a no-brainer the Westside Bypass is. It would simultaneously relieve three bottlenecks at once: reducing traffic on HWY-217, through the HWY-26 tunnel, and on the I-5 interstate bridge. It would also significantly reduce housing costs, opening up new opportunities for bedroom community development in what are now difficult to navigate areas along the periphery of the Beaverton-Hillsboro-Wilsonville industrial triangle.

Vial deserves a lot of credit for his leadership on this issue. When the rest of Salem finally gets serious about transportation infrastructure, when it stops talking and starts building, then a western arterial freeway that directly connects our Silicon Forest with Seattle should be among our first priorities.