Executive Summary
The immediate effects of the most recent recession have hit Oregon especially hard. Declining incomes, diminished job opportunities and depressed property values have stalled spending and shrunk savings. In addition to these immediate effects are the longer-term effects that are just now being projected. State government in Oregon will emerge from the recession with reduced revenues and a reduced potential for economic growth to sustain the rates of state government spending growth enacted prior to the recession. The most recent revenue forecast projects general fund revenues to be $1.27 billion lower than forecast at the end of the 2009 legislative session. Last year, Oregon Governor Kulongoski declared, “Oregon cannot continue to fund public services at the levels funded today.” Rather than make minor revisions, Governor Kulongoski argued a “reset” is necessary, charging that “we must re-think the way we deliver the services provided by state government.”

We agree with the Governor’s statement above. However, we reject the notion that budget deficits are determined by subtracting expected revenue from wished-for state spending. Instead, we propose what we call Reality Based Budgeting, beginning with the concept of a state spending limit such as that proposed through Measure 48 on the ballot in 2006. If that attempt to rein in state spending growth had passed, the 2011-13 general fund budget would be roughly inbalance without taking any drastic measures. It did not pass, of course, so we propose a series of cost cutting and revenue enhancing measures that do not include raising income taxes. Together, these measures should close what we believe is a more “realistic” budget gap of about $2 billion in the 2011-13 biennium. Moving forward, the “reset” in state budgeting should include adopting a spending limit similar to Measure 48. Coupled with efforts to recharge the state economy, such as permanently repealing the state’s capital gains tax, we see not a decade of deficits, but a decade of growth and prosperity.

These ideas are only a subset of opportunities for Oregon to face its fiscal challenges and to rethink the core services the state provides, the costs of state services, and the ways in which services are delivered. We view these ideas as a starting point for an ongoing conversation. 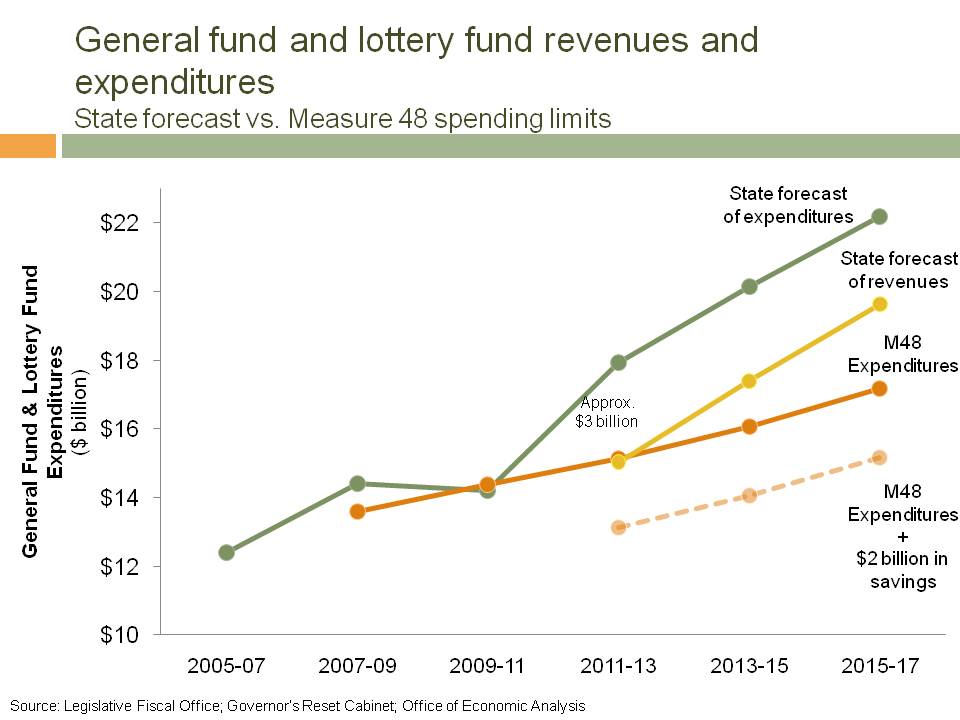