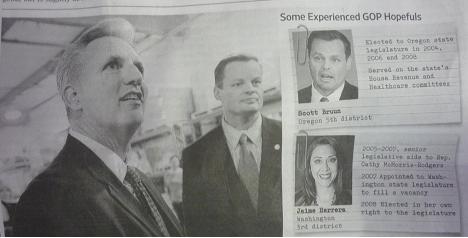 Here is an excerpt from the Wall Street Journal Article which talked about GOP not making same mistakes as 1994. Read article below.
.

Mr. McCarthy takes the view that a House Republican majority would indeed be a potent force of change. As he sped in a Chevrolet Silverado to campaign events, he contended this season’s GOP candidates are relatively unorthodox, noting that fewer candidates come from state legislatures than in previous elections. “Also, these are not 20-year established people,” he said. “They’ve been serving a couple terms. And some of them are serving part-time.”

Mr. McCarthy conceded state representatives often make suitable candidates. “They will have some name ID and some credibility,” he said.

That kind of resumé is making some Republican backers anxious. At a dinner for Mr. Bruun at Portland’s University Club, a small group of donors sought assurances the new crop would be different from recent Republican majorities, especially on matters of spending.

“The freshman class is going to be bolder than anyone there,” Mr. McCarthy promised to about 15 financial-services executives who had paid $500 for their steak dinner. “They’re going to be like a stampede of horses.” …

Mr. McCarthy’s next stop was Paradigm Foodworks Inc. in Lake Oswego, Ore., to appear with Mr. Bruun, who is challenging Democratic Rep. Kurt Schrader. In a press conference touting Mr. Bruun’s endorsement by the U.S. Chamber of Commerce and other groups, Mr. McCarthy depicted Mr. Bruun as an accomplished legislator.

Last was breakfast for Mr. Cornilles, the first-time candidate who is seeking to oust Rep. David Wu (D., Ore.). In a district where Barack Obama won 61% of the vote, Mr. Cornilles plays down his party affiliation and any association with the tea party.