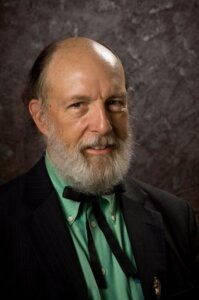 With his signature colonel ties and a home address in Camp Sherman, Randal O’Toole certainly projects the image of a pioneer, but in the case of testing out the future of transportation financing, he’s as much substance as style. The Beaver State’s leading transportation economist is a volunteer in an Oregon pilot program that tracks drivers’ mileage for billing, an experimental alternative to the gas tax.

Given a choice of vendors, he chose Azuga, a company whose main business is helping trucking companies keep track of their fleets. Azuga sent him a little GPS that plugs into the diagnostic port on his car.

O’Toole gave Azuga $20 in credit and every month they send him a report of how much he drove and how much is left of that $20. Azuga deducts O’Toole’s estimated gas taxes assuming his vehicle, a Subaru Outback, gets 30 mph. The mileage-based user fee is 1-1/2 cents so he ends up paying a net of about half a penny per mile.

While it’s designed to mimic the Oregon gas tax, this technology has much potential to be more efficient. It could be the Uber of transportation financing and infrastructure maintenance.

Eventually, the GPS could keep track of which roads he drove on and automatically send the money to the proper transportation agency proportional to his actual use of theirs roads. For example, O’Tool told me: “Over the course of a day I might drive on a private road, a federal (Forest Service) road, a city street, a county road, and a state highway. Unless I’m driving on a state road, my money should go to the road owners, not the state.” This would also be an efficient means of implementing congestion pricing.

Every time I hear Randal O’Toole speak, I learn something. If you’re near the University of Oregon tomorrow he’ll be speaking at a Students for Liberty event, and I suggest you stop by.