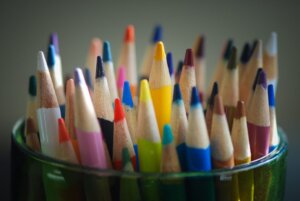 What would you do if you read an article about an Oregon public high school whose students seemed to be performing well above state averages? If you’re U.S. Secretary of Education Betsy DeVos, you’d hop on a plane and come sit in on three senior classes at the school─McMinnville High School. That’s exactly what DeVos did on October 11. She also met privately with some students and friends, including Cascade Policy Institute School Choice Outreach Coordinator and 2012 Oregon Mother of the Year Bobbie Jager.

Her visit didn’t go unnoticed by those who incorrectly believe she’s out to destroy public education. Some 200 protesters, including teachers union officials, stood outside the school and let anyone who would listen know that they don’t want the school choice policies DeVos advocates anywhere near what they apparently see as the only educational institutions worthy of taxpayer support.

Betsy DeVos is a long-time advocate for letting parents choose where their children get their educations. Time and again she’s tried to make clear that she’s not against public education; she just believes that educating the public isn’t always done best in traditional government schools. Sometimes students do better in public charter schools, private schools, online schools, or even in home school.

So why can’t the protesters who showed up in McMinnville last week see what Betsy DeVos sees? Perhaps it’s because, for whatever reasons, their worldviews simply don’t include an understanding of how consumer choice and markets can work together to provide better services at lower prices than can government monopolies.

Cascade Policy Institute published a thought piece on these concepts sixteen years ago that still stands as a seminal introduction to these perplexing concerns. Called “Choice Thinking,” here’s the abstract:

A powerful, yet flawed perspective grips the public mind such that it ignores, distorts, and rejects school choice facts and arguments. Just as the Church rejected Galileo’s scientific findings, this public school ideology rejects choice supporters’ educational findings and analysis. The public simply cannot fit a market perspective into its understanding of how the world works. We will not make major strides toward school choice if we continue to believe that simply teaching the public about the benefits of market education or tinkering with choice proposals will be enough. A new market perspective can’t be simply taught. It must develop, like any living system develops, out of its more primitive pro-government form. Our challenge is to understand this transformation. We cannot change the public’s thinking if we do not understand it.

So, there you have it. School choice supporters, by and large, don’t understand why people like the Betsy DeVos protesters can’t comprehend what we see as obvious truths.

Of course, some of the protesters may very well understand what we are talking about. They have a vested interest in keeping the status quo, so that all the billions of taxpayer dollars being spent to educate the public only flow into the government buildings where they work and teach. The fact that this status quo isn’t working for many children is the reason Betsy DeVos and countless school choice supporters advocate for letting the money follow the child to the school of their family’s choice.