Legislative leaders are warning of a $300 million budget shortfall despite $1.5 billion in new revenue and $785 million in new taxes last year alone. Lawmakers are declaring a emergency shortfall amidst a robust surplus as a ruse to raise even more taxes.

Furthermore, the false emergency is based on controversial numbers.

Senate President Peter Courtney (D-Salem) said at an Associated Press forum that the Legislature has a “serious budget issue” because of an expected deficit of $200 million to $300 million stemming from changes to federal tax laws.

Courtney’s number are debatable. Acting Legislative Revenue Officer Chris Allanach calculates the state’s tax collections in 2018 may be only $100 million lower than expected. The dip is temporary, because LRO estimates net tax revenues over the next decades are likely to exceed previous projections. What is happening is that the new Federal Tax Reform may immediately reduce a small portion of tax revenue into Oregon but will soon balloon higher revenue (way beyond what was lost) each passing year. Lawmakers are using a miniscule temporary revenue dip to scare taxpayers into more permanent taxes. 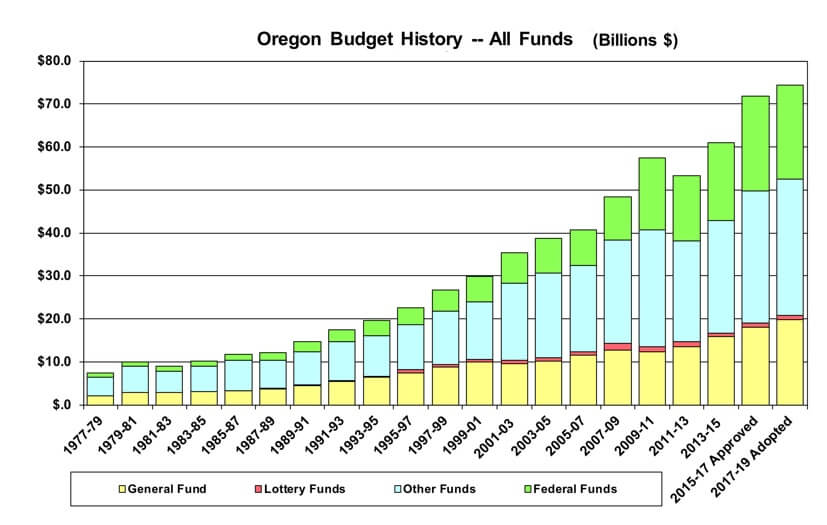 •  $338 million related to transportation, including an increase in the gas tax, vehicle registration, and a payroll taxes;
•  $443 million in taxes on health insurance and healthcare providers;
•  $5.5 million in business taxes associated with the sale of intangible assets;
•  $1 million associated with the phase-out of certain tax credits.

Nevertheless, the AP reports Democrats in the House intend to focus on establishing a constitutional right to health care, spending more on public education, and implementing a carbon cap-and-trade program, among other priorities, said House Majority Leader Jennifer Williamson, (D-Portland).

The state’s economists will release their latest revenue forecast on February 16, or about one-third of the way through the 35 day legislative session. By then, lawmakers will have a better idea of whether the state will have “shortfall” or a surplus. Regardless, it’s clear the state will not have the time or the money to spend big money on big new projects.

— Was this article helpful?  Please support our education efforts here.