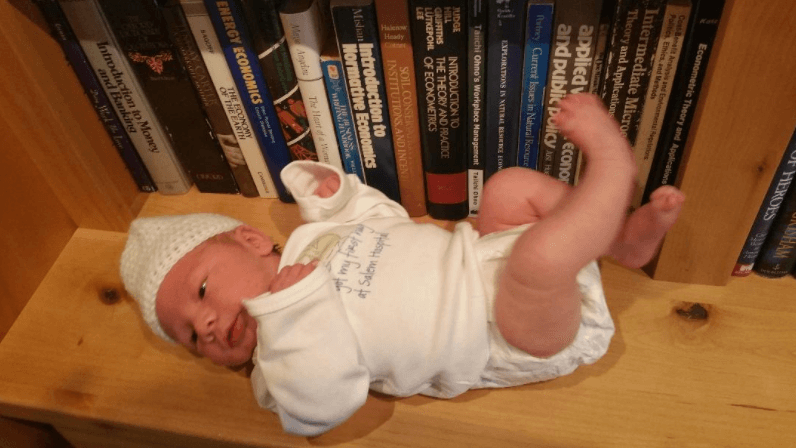 My employer has given me the week off to take care of my exhausted wife. While doing so, as I contemplate the birth of our Alexander Edward Shierman, (pictured above wearing that cute cap Cascade Policy Institute Executive Vice President Kathryn Hickok graciously gave us) I’ve observed two things that symbolize why I remain moderate in my policy views in a time of populist rage.

Both of these observations are related to the t-shirt my son wore in that picture above. It’s difficult to see, because being less than a week old, Alexander couldn’t sit up on my bookshelf to properly pose for the picture, but he’s sporting some marketing material that says: “I got my first hug at Salem Hospital.” My wife didn’t want to give birth there but is now glad she did.

Back in July, when it became time to make arrangements for a venue, Shana insisted she didn’t want to give birth in a hospital. She wanted to go to a natural birthing clinic instead. When I questioned why, her answers ranged from the romantic rejection of modern Western medicine to a personal phobia of hospitals. I caved.

Last December I took a day off work to attend one of her prenatal visits at the chosen birthing center in a remote location west of Salem. Its rustic farmhouse location was certainly more attractive than the concrete structure and busy environment of a 21st-Century American hospital. The surrounding countryside was as gorgeous as if my wife planned to give birth in the 19th-Century Oregon Territory. It certainly lived up to its projected image as a peaceful place to bring new life into this world.

There was something in their website’s FAQ that bothered me, however. It reminded me why I had misgivings. The first question asked was “Are Birth Centers Safe?” The answer started off defensively with a vague summary of the medical literature: “Many studies have been done to either support or question the safety of midwifery.” This was followed by some legitimate methodological points and a highlight of one study that found the results they want to believe.

After admitting there are some open questions about safety, they answered the central question: “Who uses birth centers?” I did not find these reasons compelling justification for taking on needless risk:

When we left their facility that day I was mindful that historically, women have had an innate tendency to die in childbirth, that such risk is indeed a medical problem, and that I’m less interested in a personal relationship with medical professionals and autonomy than I am interested in having the most advanced technology and a highly educated staff. But rather than object further, I prepaid for this birthing center’s services to get a 10% discount off a price tag that was actually higher than what we’d have paid by going with Salem Hospital.

Last Friday, just after midnight, my wife’s water broke. I was asleep. Forty-eight hours of labor would follow. One of the many things I love about my bride is how strong and calm she is. She didn’t wake me up. Her midwives’ instruction was to not head to the birthing center until her contractions became within five minutes apart. So Shana timed them while I slept. Saturday morning we watched recorded episodes of Jeopardy! until noon when she calmly told me it was time to go.

We spent the night there at the birthing center, waiting for her involuntary contractions to “transition” to the point where she could begin active pushing. Shana had wanted a water birth. It was one of her seemingly more valid points against a hospital birth, since hospitals don’t offer water births. That night we learned the hard way that being in water can slow the contractions, delaying the transition. By the time we learned that Shana cannot have a water birth, my wife’s time in the water was simply many hours of wasted strength she would need.

After the water birth was abandoned, Shana was advised to sit on a birthing stool. That’s how my wife spent last Sunday afternoon, waiting for the pace of her contractions to pick back up again after having previously slowed them down in a big bathtub. As she came to that painful point of the transition, my drained wife became curious about how long the pushing phase would be. A midwife told her it’s typically between one to three hours and the worst she’d ever seen was four.

After six hours of pushing from multiple positions, our lead midwife handed it over to another asking for any new ideas. A couple more positions were tried, such as when I was asked to hold my wife up as she tried to squeeze with the aid of gravity in a standing squat. Shana was also given oxygen and a shot of maple syrup for energy. Throughout this whole process, the baby’s birth rate got tracked. After one particularly agonizing push fest, time seemed to stop as my son’s heart rate became inaudible. This was partly due to the effect of his location on the handheld device the midwives had. It was also because of the stress this repeated pushing was having on our baby; his heart rate was becoming fainter. Later we would learn that during this time he’d been profusely defecating in the womb, a serious sign of fetal stress.

Around 11pm Sunday night, Shana was told to push as hard as she could for one more attempt. If the baby’s head could not clear her pelvic bone in the next five minutes, she’d have to go to a hospital where, we were told, they would use a vacuum extraction to assist her pushing.

I became the ambulance driver. The clinic was too far away from the city for a 911 call to be faster. With my wife and a midwife in the back of our Subaru and an oxygen tank, I drove us to Salem Hospital.

On duty that night was Dr. Cheryl Lugenbill, a bona fide local legend in this field who has become an expert in high-risk obstetrics. Lugenbill immediately assessed the situation with authoritative professionalism decisive accuracy. The problem was not that my wife was not pushing hard enough. This wasn’t a question of putting her in the right position. And a vacuum assist would likely harm our baby. The problem was Alexander’s position in the womb prevented a natural birth. I’ve never been through this before, but I strongly suspect the professionals at Salem Hospital would have known that fact much earlier.

If my wife was giving birth two centuries ago in the Oregon Territory, both would have died. Death in pregnancy is “all natural.”

Notice that I’ve never revealed the name of this birthing center. I don’t want to give them any bad press, because I think they did their best, given their level of technology and knowledge. For women that want this, birthing centers will literally deliver. Indeed, one of my wife’s objections to giving birth at a hospital was that she thought they were too quick to recommend a cesarean-section. Only after 48 hours of fruitless labor would she have believed that Dr. Lugenbill’s recommendation was the right thing to do.

These birthing centers serve a legitimate market niche, offering care to people who reject the services hospitals provide. Women ought to have this choice. Though I thought this was the wrong choice for my family, if policymakers were to ever try to regulate these birthing centers out of existence, you’ll see me defend them here on the pages of the Oregon Catalyst.

Whether or not one should choose a birthing center over a hospital is not the point I want to make. If it was, I would have summarized that full medical literature for you. Instead, I want to use elements of this story to explain why you don’t see a lot of populist rhetoric in my writing.

The first element is Romanticism, the ideological rejection of science and modernity. It’s behind the avoidance of vaccination, fluoride, and other advances in modern medicine.

Often conservatives mock this as hippy-dippy urban behavior, but I keep seeing an increase of it in the Trump era conservatives’ rejection of expertise, data, science, and reason. I have long been a skeptic of the size and scope of government power, but I developed this worldview in the Reagan era when it was informed by academic learning, not a rejection of intellectual acuity.

The second element is the actual quality of care my wife got once she was admitted to Salem Hospital. If the predictions of many conservative writers in 2010 were to be believed, our healthcare system should be nothing but mayhem and ineffectiveness in the wake of the passage of the Affordable Care Act. Yet our healthcare system actually is probably better now than it was eight years ago.

I’m not saying it’s better because of Obamacare; I’d say it’s better despite Obamacare. I’ve been critical of the Affordable Care Act in much of my writing for this blog, but I avoid hyperbole when I weigh the merits of such public policy choices. I never lose sight of the fact there are people like Dr. Lugenbill who saved my son’s life that will do their best given the institutional and regulatory environment they find themselves in to make the most of things.

As the Republican Party recovers after the massive blue wave it will face this fall, it’s my hope that we can then move forward without the populist vices of anti-intellectualism and hyperbole. America is already great. It was great in 2015 too. America never lost its greatness, but to pass legislation that will empower our country and our state to new levels of greatness, it’s going to require knowledge, expertise, and sober judgment. Otherwise, being a Republican will simply be like being a woman trying to give birth to a child that’s in the occiput posterior. More pushing will bring more pain but won’t result in “winning” better policy outcomes. 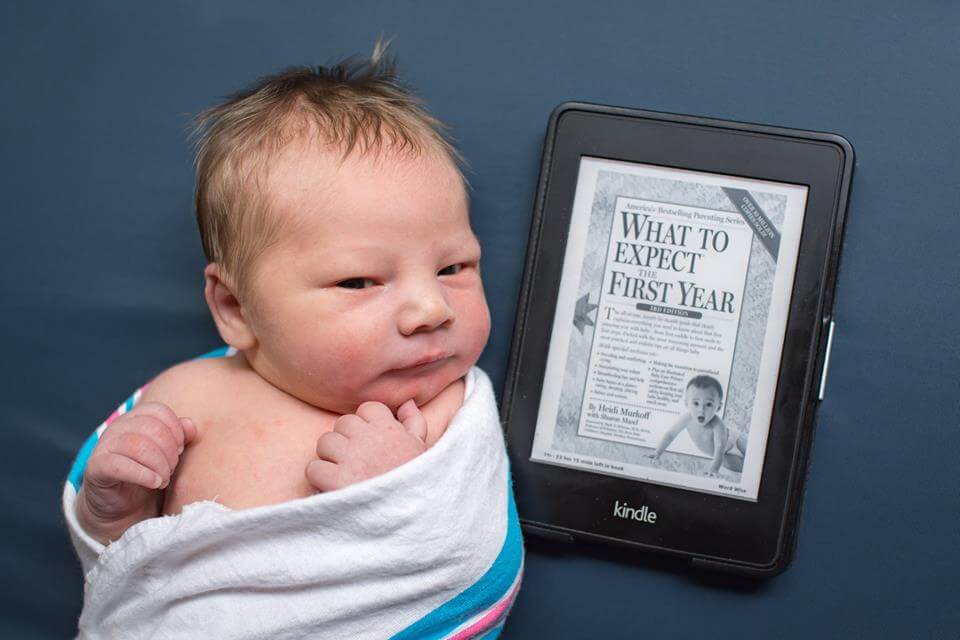