What if a similar Carbon tax is enacted in Oregon?  One example of the cost impact for consumers.

Washington state’s latest proposed Carbon (CO2) tax, state Measure 1631, has been defeated in the 2018 Washington State General Election.  This Citizen initiative would have imposed a $15 per metric ton tax on the CO2 content of fossil fuels sold or consumed in Washington state starting in the year 2020 – with annual increases of $2 per ton, thereafter.    The initiative/measure failed with 56 percent of voters disapproving, which marks a decline in disapproval from the last attempt at a carbon tax in Washington state (the 2016 predecessor to this Carbon tax was rejected by 59% of voters).  Oil companies with petroleum oil refineries in Washington state spent heavily to defeat this measure, somewhere in the upper $30 million-dollar range; although it appears the yes side received donations at a rate of half this amount.

Democrat party legislators in Oregon are now in a position after this November’s 2018 General Election to enact a carbon tax for the state of Oregon.  The Democrat party will hold 18 seats in the Oregon state Senate and 38 seats in the Oregon House of Representatives next year, giving the party super majorities and the Governor’s office (Kate Brown – D).  Oregon already has a Carbon reduction program of sorts – the Clean Fuels Program passed in 2017, not as a tax but a regulation mandating offsets or other steps to reduce by ten percent the carbon dioxide emitted from combusting gasoline and diesel transportation fuels.  The 2018 legislative Democrat party leadership last Spring put off until 2019, passing a comprehensive carbon tax/offset program.

So, it looks probable a carbon tax of sorts will be enacted in Oregon in this next year’s full Oregon legislative session.  Notable hurdles to enactment of a carbon tax in Oregon include Senator Betsy Johnson (D) who has voted against carbon related legislation in the past.  Also, rural democrat Oregon House members might have to be courted with special dispensation, seeing how rural area folks are especially dependent on automobile travel while also sporting lower overall income levels.

The Oregon carbon tax I would imagine would be like that of Washington state’s Measure 1631 (just defeated), although Oregon’s tax may very well start out at a higher rate than $15 per ton of CO2 emissions.  The tax revenue would likely go towards renewable energy and other state sponsored programs purportedly for reducing Oregon’s aggregate fossil fuel related CO2 emissions.  Former state of Oregon chief economist, Tom Potiowsky, once advocated for a revenue neutral carbon tax, where the carbon tax revenue would be fully sent back to Oregonians as an income tax credit (independent of one’s individual fossil fuel consumption).  British Columbia is said to have such a tax presently.  But I sense the real political motive in Oregon is to continue financially supporting the renewable energy and other environmental interests, not to just discourage CO2 emissions.

What is particularly frustrating to me is while the state of Oregon prepares a carbon tax to mitigate against CO2 emissions, various cities and other local governments in Oregon spend significant public monies and layer on new energy related restrictions on their residents in new ordinances called climate action plans.  These climate action plans are potentially very intrusive, closing off freedom of choice for how residents choose to heat their homes, fuel their cars, build homes and businesses; and in the case of Lake Oswego, there is even talk of encouraging folks to eat less beef and other meat meals.  If we as a state are going to mitigate climate change through a state-wide tax on carbon, it seems unnecessary to also micro-manage our lives and businesses at the local level.   (At the local level, it seems the race is on to be the “greenest” town around – what I call “green branding.” So, a state-wide carbon tax isn’t likely to keep Cities and other local government in Oregon from instituting Climate Change Plans/programs.)

A state-wide carbon tax, without the associated state sponsored renewable energy/environmental spending programs, is very likely the most efficient method of carbon mitigation; as the tax alone allows free markets to find through experimentation the least cost ways of reducing/offsetting CO2 emissions.  This should let cities in Oregon instead focus more on what should be their core functions, for instance, public safety and maintaining public infrastructure.  (But cities in Oregon may see “green branding” as a means of attracting the young creative class of innovators.  I would also imagine for the local government class of employees a desk job pushing paper such as administering a climate change consulting contract – not to mention climate change conference travel – is more appealing and even more financially rewarding then say doing the actual physical labor of filling potholes and/or other laying down of asphalt.)

A $15 tax per ton of CO2 would increase the cost of residential space heating by about 12 percent for Oregonians heating with natural gas, or about 9 to 10 cents per therm using the current rate schedule for Northwest Natural utility company (Oregon’s largest natural gas utility company).*   If this tax increases as in Washington Measure 1631 at the rate of $2 per year, then in ten years; the $15 tax becomes $35.  In this case, Northwest Natural space heating customers would see their space heating cost increase by over 28% from the current level, all other things held equal (effectively excluding general inflation in utility service costs).

There are some pilot project numbers for the cost of pulling CO2 from the atmosphere, putting one technical solution for carbon mitigation, at a cost of $94 per ton of CO2.  If the Carbon tax in 40 years rises to the rate of $95 per ton, hypothetically Northwest Natural space heating customers would see their space heating cost increase by over 75% from the current level, again all other things held equal.  Interestingly, even with such draconian taxation, natural gas would remain one of the most economical energy forms for home heating, beating out electric space heating in most cases.

It is very possible technical solutions for carbon emission mitigation, like pulling CO2 from the atmosphere with machines and chemistry, will come down in cost as pilot projects advance technologically. 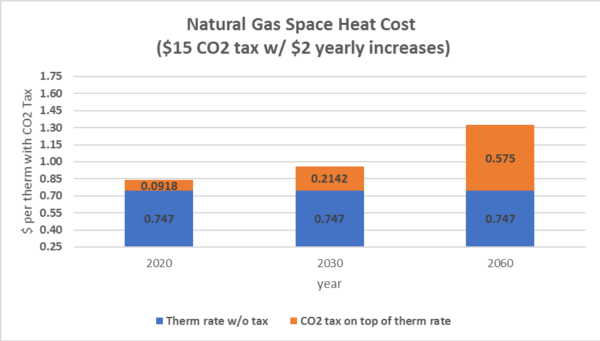