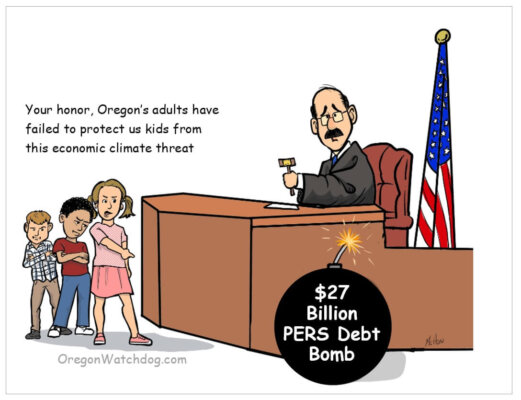 This week before a room of 300 high schools students, two young Oregonians argued their case before the Oregon Supreme Court in a case known as the ‘Climate kids’ lawsuit.

The ‘Climate kids’ are demanding the Court to over-ride Congress, the President, democracy and the United States Constitution to enact a sweeping agenda to restructure the national energy infrastructure and force citizens away from using fossil fuel.

If the environment is a threat, why not also address the threat of the $27 billion dollar PERS government pension debt bomb? Are not parents acting irresponsible in allowing this pension debt to explode which is a severe drain on our schools, health services and public safety resources? Is not fixing the $27 billion debt a good way to free up billions that could be used to fight for a better environment?

We hope we live in an Oregon where both our fiscal and natural environment are better through better stewardship.

— Did we we made you chuckle? …   If you like what we say, please Email, Tweet, Like this article, and send us a donation as the Taxpayer Association of Oregon has been making taxpayers laugh (and politicians cry) for 20 years.