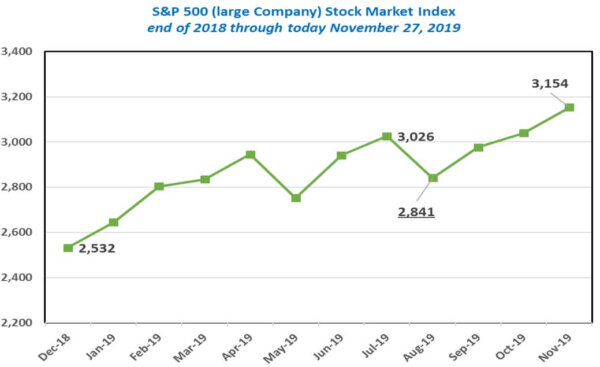 (While many are thankful, we should work towards a broader base of prosperity going forward)

Since the early 1980s, the U.S Federal Reserve and the Federal government are using Keynesian economics, whereby money supply (borrowing) is made easy and interest rates are repressed. This would normally result in hyper like inflation nationally. But to counter inflation, the U.S for several decades has effectively imported labor (the largest cost of doing business, domestically) from abroad from places like China.

This brought a global labor supply glut to the U.S. Consequently, U.S wages have lagged in the face of competing labor supply from abroad embedded in the imports of goods and services into the U.S. So, for those who live paycheck to paycheck (the lower middle classes), the last 30 to 40 years is not particularly robust economically.

For those invested in stocks, the last 30 to 40 years is a steady rise in the standard of living. Stocks in U.S companies benefit from low pressure on labor costs, and a rise in corporate debt at low interest costs used for stock buy backs and mergers (fewer shares leading to higher stock prices). Then there is Trump’s recent tax cut for U.S corporations, again a widening of profit margins for U.S companies. There is also an inflow I believe of foreign monies into U.S stocks as foreign stocks have barely changed in share prices in over five years now.

One of the downsides to this U.S. Keynesian regiment is that it allows for increased speculation in dubious companies, with large debt in profit stagnating industries. When interest rates must be raised to slow inflation, there usually is a big sell off in the stock market as for example the Great Recession of 2008-2009; which sank many businesses, turned some businesses to zombies where debt service costs take all of the company’s net income, and a lot of home owners and other debtors get foreclosed on.

So, let us be thankful but recognize we need improvements in our economic and political governance. The gold standard, with its physical money supply growth restrictions, made for a more real economy, rather than the current Keynesian one requiring continual debt expansion – be it personal, corporate and government.

I am not a fan of the Greta Thunberg movement, as I very much suspect that many environmental mandates are susceptible to authoritarianism in sheep’s clothing. But Greta is maybe right in the sense that the boomer generation is living beyond its means, financing it on the backs of future generations.

These future obligations can maybe be fortuitously diminished if entrepreneurs, such as an Apple Corporation, invent and bring increased productivity. I add this hopeful caveat because, even thoughts of future payback are still subject to Yogi Berra’s infamous quote:

“It’s tough to make predictions, especially about the future.”