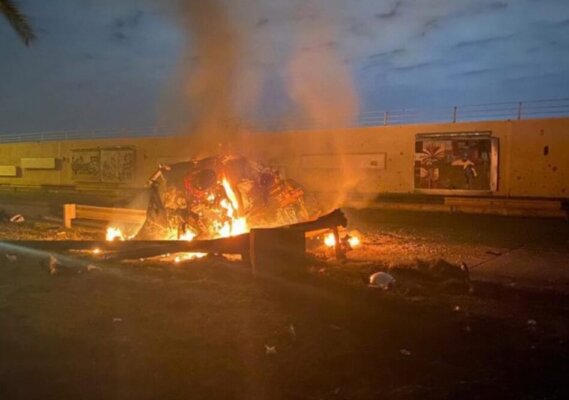 On January 3, 2020, President Donald Trump approved of the launch of a drone-fired missile to kill Iranian terrorist General Qasem Soleimani.  Despite the fact that Mr. Soleimani held the rank of general and commanded the thuggish Qud forces in Iran, he was primarily a terrorist.  He was responsible for the deaths of literally thousands of men and women – including United States military personnel – through the use of bombs, rockets, improvised explosive devices (IED), suicide bombers, poisons and other surreptitious, back-stabbing devices.  He had the full confidence and approval of the Iranian government including its Supreme Leader and was backed by access to virtually unlimited funds, including the $1.7 Billion in cash bundled and delivered in bales by former President Barack Obama to Iran.  Before Soleimani’s body was cold, former Vice-president Joe Biden and current Democrat presidential candidate condemned Mr. Trump for authorizing the strike citing his highly speculative fear that the action could lead to a full scale military conflict with Iran and its terrorist organizations.  In doing so Mr. Biden confirmed (Mr. Obama’s) Secretary of Defense Robert Gates’ appraisal:

“[Joe Biden has been] wrong on nearly every major foreign policy and national security issue over the past four decades.” {Bracketed words supplied}

For eight long years, Mr. Obama, accompanied by Mr. Biden, conducted a foreign policy of indecision and appeasement.
Having become accustomed to conducting domestic policy by instilling fear of the unknown Mr. Obama and Mr. Biden succumbed to the same fear in foreign policy.  You may remember Mr. Obama and his fellow Democrats regularly warned of the imminent demise of Social Security and Medicare at the hands of Republicans even though no effort was being made to substantively change either program.  Those same Democrats have used an “end of the world scenario” relating to global warming and predicting its imminent demise in twelve years.
(Beginning with former Vice-President Al Gore (D) that twelve-year period has become a moving target – easy to say, impossible to validate.)  Their willing partners in the mainstream media love doomsday prophecies and it gives them license to speculate endlessly without any accountability – including accountability for the previous erroneous predictions.
So it was with foreign policy that even the whisper of adverse consequences was sufficient to freeze Messrs. Obama and Biden into inaction.  Russia invaded the Crimea without consequences.  Mr. Obama used military resources to oust Libyan dictator Muammar Gaddafi and left the Libyans high and dry when Islamists sought to gain control.  He congratulated the Muslim Brotherhood when they took over Egypt despite having been labeled as an international terrorist organization and condemned the military takeover after the Brotherhood began a murderous purging of Egyptian politicians.  He drew a “red line” in the sand warning Syrian President Bashar al-Assad to not use gas on its own citizens and quickly abandoned them when Assad proceeded to use the poisonous gas.  He caved into virtually every demand by the Iranians in order to achieve a “nuclear deal” with Iran that freed over $150 Billion in frozen Iranian assets and a clear path to creating nuclear weapons without adequate inspections.  He remained silent as to the provocations of North Korea.  In fact the only aggressive action he ever undertook was an attempt to interfere in Israel’s elections because of his personal dislike of its prime minister, Benjamin Netanyahu – Israel being our strongest ally in the Middle East.  The singular aggressive action that Mr. Obama took against our enemies was the elimination of Osama bin Laden and at that, Mr. Biden advised against taking the action for the very same highly speculative fear he expressed over Mr. Trump’s approval of the strike on Mr. Soleimani.
In summary the foreign policy approved and implemented by Messrs. Obama and Biden was a demonstrable failure that left our allies distrustful and our enemies emboldened.  The fact that they would condemn the elimination of a murderous thug like Mr. Soleimani is laughable.
Still you might wonder how it was that Messrs. Obama and Biden could be so impotent and indecisive in foreign affairs and so bold on domestic affairs – so bold that they routinely lied to the American people about the justification of their actions (Obamacare, etc.) and exceeded their executive authority because they could not get their way with Congress (DACA, etc.).  It’s pretty simple.  On the world stage if you are wrong in your actions you will be held accountable.  On the domestic stage if you are wrong – particularly if you are wrong about some unfounded projected catastrophe (global warming, bankruptcy of social security, collapse of health care, etc.) there are no consequences that you cannot blame on somebody else.
The quaking fear of retaliation paralyzed Mr. Obama much as it paralyzes the rest of the left wing leadership of the Democrat Party.  I do not advocate a reckless, testosterone fueled foreign policy either.  But between that and the paralyses of fear practiced by Democrats there is a reasonable path where doing the right thing – ridding the world of brutal, murderous thugs – is backed by knowledge that you have the will and the capacity to address any adverse reaction.  That is my impression of what Mr. Trump did in approving the execution of Mr. Soleimani.  I am disgusted that the Democrats feel compelled to condemn simply because it was Trump – even when it is Trump doing the right thing.
Share
Related posts:
Tags: Joe Biden