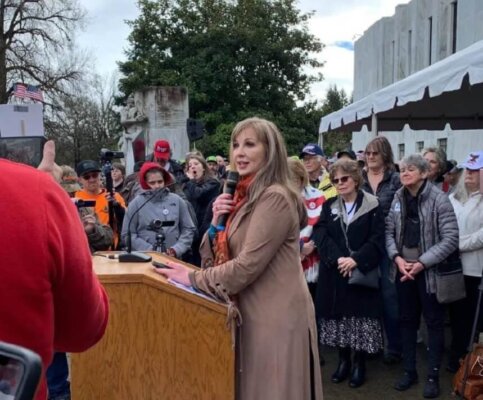 February 24, 2020 “I can no longer stand by and watch this poorly crafted cap and trade legislation get steamrolled through the capitol,” said State Senator Kim Thatcher (R-Keizer). “Sometimes a boycott is the best way to stop bad laws from happening to good people.”

Thatcher joined her republican colleagues and denied a quorum for the Senate floor session prior to any potential votes being taken on Senate Bill 1530. “The vast majority of Oregonians I’ve heard from are saying the cap and trade measures being proposed in the Senate and the House (House Bill 4167) will do more harm than good.”

There are several reasons Senator Thatcher objects to these measures. “If the state is going to create such a huge new program impacting business owners and families, then they should have a right to vote on this,” explained Thatcher. The current bills contain emergency clauses which prevent referrals to the ballot.

Senator Thatcher is also skeptical of the many parts in the bills which are exempt from Oregon’s public records laws. “I have worked hard on the Public Records Advisory Council to ensure fairness and transparency in our public records system in Oregon,” noted Thatcher. “This scheme flies in the face of what most people would call good government.”

The complicated nature of the cap and trade system called for in these measures will be administered by a variety of agencies. “After serving many years on the Joint Legislative Audits Committee, I know massive new programs like this require oversight to ensure taxpayer dollars are being spent wisely,” added Thatcher. “I would hate to see our state experience another billion dollar BETC (Business Energy Tax Credit) boondoggle.”

Policy disputes over policies such as cap and trade are why Senator Thatcher sponsored Senate Joint Resolution 202 to do away with annual session. “Oregon voters were told the short, even-numbered year sessions were designed to fix small budget tweaks or deal with emergency issues, not heavy policy controversies that are better deal with in a long session.”