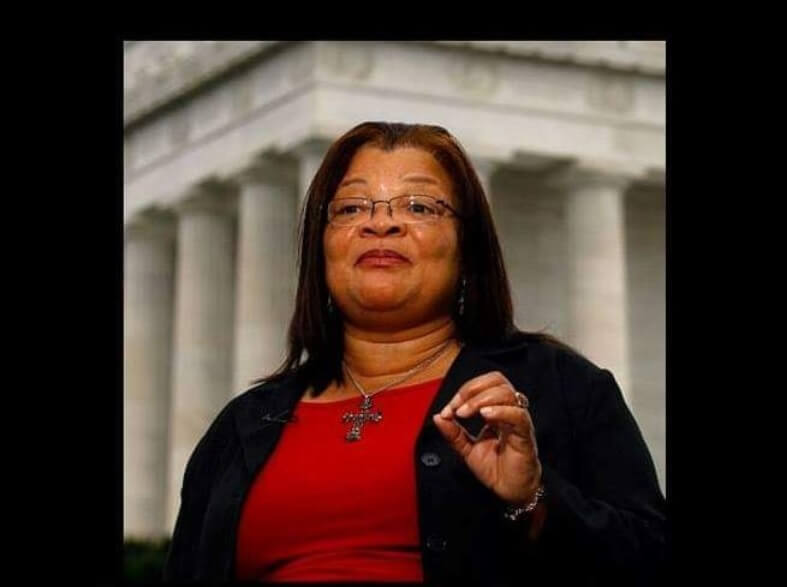 Alveda King: “People of America, your voices are being heard. Now, let us come together in unity and faith and love and communicate, solve the problem; violence will not do that…I remember my father standing on a car, we got out of the house safely, and he was standing on the car and he said to the people: ‘please, go home. Don’t be violent, go home. If you have to hit somebody, hit me, but I’d rather you go home. I’m safe, my family is safe, go home.’…”

“I have been speaking with young people from every ethnic community, notice I do not say race. Our skin color does not define us. We are not colorblind. We can see skin color. We can see very clearly, but that is supposed to help us appreciate each other and not oppress each other…We are a melting pot. Martin Luther King Jr. said we may have come to America on different ships but we are all in the same boat now. He said we must learn to live together and brothers and sisters. He didn’t say separate races but rather as brothers and sisters…”

News Interviewer: “The cause of the family is being lost in all this looting and crime we are seeing every night.”

Alveda King: “That’s very disrespectful. They [George Floyd’s family] are grieving. They miss their loved one. This was a man who was trying to help build and strengthen the community. Yet, these rioters and looters, not the protesters, peaceful protesting is fine. You march. You pray. You make your concerns known. Then you follow that by voting in a moral way that is not going to kill or hurt anybody. You elect people who value that life. That sanctity of life. That breath.
You know George’s breath was stolen from him. God gave him his breath and it was stolen from him. It was murder, it really was. I think it was terrible but his brother, his family, still say ‘Don’t riot’.

Why would you burn down a house? And you are supposed to protesting man that many of them do not even know. His family is saying “We want non-violence. We Don’t want this violence.”

— Taxpayer Association post-script: Because the chaos on America’s streets has been historic and because the issue of race is among America’s most complicated and heart-rendering issues. As anarchists rioters have hijacked the debate we aim to take it back from these looters by filling this blog with new constructive voices  as part of a “new voices” series.  We mean “new” as in reaching out to different voices, people and perspectives outside of our own.