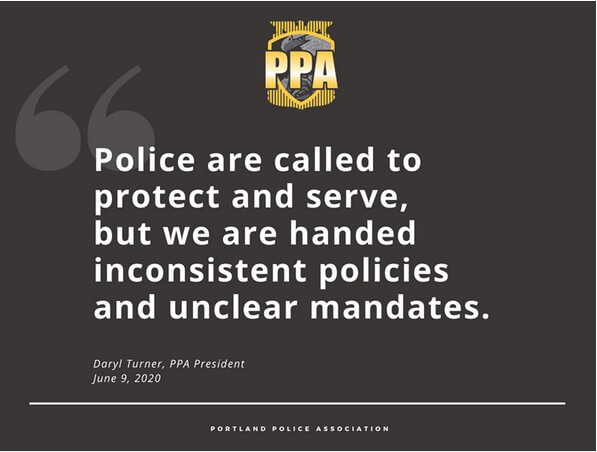 In the ongoing conversation about how policing can and should evolve along with the needs of our communities—many have asked us about police reform. We are engaged. We are listening. We are evolving along with our community. And we are hearing from residents every day who are afraid for our city.

Last week, School Resource Officers (SROs), members of the Portland Police Bureau who were assigned to the Youth Services Division and worked within local schools, have been removed from schools and reassigned. When SROs are integrated into a school system, the benefits go well beyond reducing violence in schools. Over the last decade, SROs have built relationships with teachers, communities, and students as a resource to help solve problems. These officers are specially trained in counseling and working with youth and have created a bond of trust, friendship, and safety within schools. Properly trained school resource officers play an important role in creating a school community where young people thrive and have the support they need to meet life’s challenges. Many in our community have reached out to us this week, disappointed at the decision of the Portland School Board and Portland City Council. We join them in their disappointment; unfortunately, SROs are no longer part of Portland’s public safety toolbox.

The officers, investigators, and supervisors on the Gun Violence Reduction Team (GVRT) like SROs have built strong relationships, friendships, and partnerships with community members and organizations within the city of Portland. They have not only responded to crimes, but they have been proactive in preventing crimes. They have taken hundreds of guns off the street, arrested hundreds of suspects who have committed gun violence, and responded to thousands of calls of gunfire in our neighborhoods. Gun violence—bullets sprayed indiscriminately into our community and neighborhoods, cars, homes, playgrounds, parks, and business—puts the lives of our community members at risk. Disbanding and defunding of the GVRT will send shock waves to the community, reversing years of hard work, dedication, intelligence gathering, and commitment by the rank and file members of the GVRT and removing another tool in preventing violence in our city.

Police are called to protect and serve, but we are handed inconsistent policies and unclear mandates. Our funding is constantly threatened and our staffing inadequate, but we are required to perform at peak performance with the highest levels of training. Our regional counties have woefully deficient mental health and housing resources, but we are the ones called when there is a mental health crisis. So, we respond but then we are chastised for responding. We all want safer roads but are rebuked for making traffic violation stops. Many of the low-level crimes we are called to are simply crimes of desperation. Every day, we are called upon to address, respond to, and provide solutions for issues that are not fundamentally police issues but are the consequence of failed socio-economic issues.

We see firsthand the unacceptable and devastating effects on those in our community who are most vulnerable and those who are victims of crime. Our social service system is broken. Many are demanding changes to police policy, state laws, and police accountability, and we will continue to come to the table on those issues. But we must also look at the broader impact and the upstream ideologies that affect what we see played out in our communities. Police are the last rung on the ladder and the easy scapegoat for politicians. Often, when we are called, it is because every other system has failed.

We remain committed to advocating on behalf of public safety for all our residents and our officers, evolving as the needs change so we can build stronger and safer communities for all.