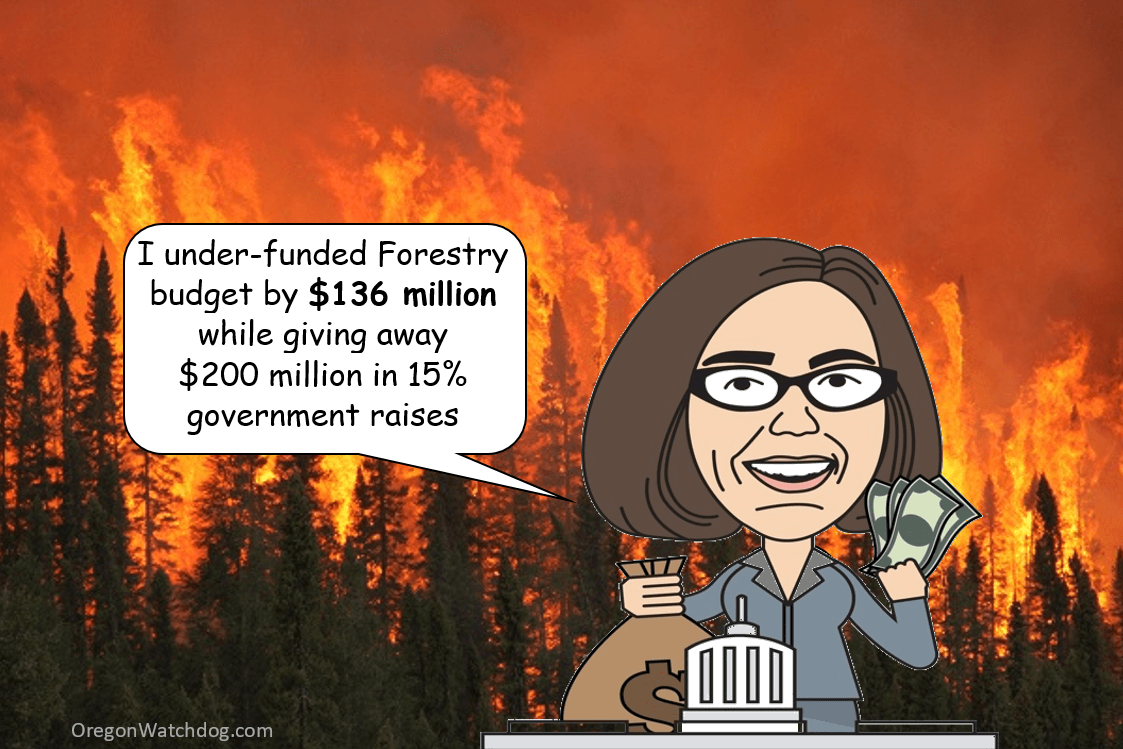 The politicians wasted no time politicizing the historic wildfires with…

Let us look deeper into the problem:

Earlier this year the Oregon Forestry Department made headlines for being underfunded by $136 million dollars. While the Forestry Dept. was underfunded, Gov. Brown and the politicians still had enough money to hand-out $200 million in state employee 15% bonuses, $28 million hand-outs to Hollywood film companies, $30 million in public art projects and $60 million in tax benefits so a luxury hotel chain could build a private hotel next to the Portland convention center.

While the Forestry Department was under-funded Gov. Brown and the politicians voted to approve $3.1 billion in new higher taxes in 2019, but left the department underfunded.

Funding isn’t the only problem.

There are five basic, time-tested, scientific consensus based, active forest management tools that keep forest healthy and prevent hazardous fuel build-up in our forests that cause catastrophic wildfires. These are; (1) logging (2) thinning (3) controlled-prescribed fires (4) removing brush and vegetation and (5) maintaining forest roads. All five are actively blocked by environmentalists and/or have been caught up in the US Federal Service bureaucracy for decades.

We can’t harvest older tress because too many environmentalists treat all trees as virtually untouchable and disregard the fact that younger tress absorb carbon faster than older trees.

Thinning forests in Eastern Oregon is made more difficult with a Clinton-era rule banning cutting trees of the (completely arbitrary) size of 21-inch diameters despite the fact that many larger trees are more fire-prone and sometimes need to be cut to save the surrounding forests they are in.

We can’t do control burns because it creates smoke which generates public complaints which now looks absurd in light of the smoke we have now (since Oregon hit the world’s worst air quality during this season).

When it comes to clearing underbrush/vegetation we find that environmentalist obstruct, litigate and flood our land management agencies with objections and ‘paperwork protests’ sometimes 500-pages long. The bureaucracy requires each complaint, no matter how frivolous, to be researched and responded to, which delays forestry projects for years. In 2017, the Oregon Pickett Hog timber sale was overwhelmed with nearly 30 paperwork protests complaints which delayed the project for years.

When it comes to roads every year close to 1,000-2,000 miles of forest roads are decommissioned.  Removing forest roads makes it harder for firefighters to actually reach the fires.

Twenty years ago environmentalist produced studies saying by leaving forests untouched we would instead make more money through recreation to make up for the lost timber harvest revenue. Twenty years later you now have plummeting timber revenue and our forests up in flames.