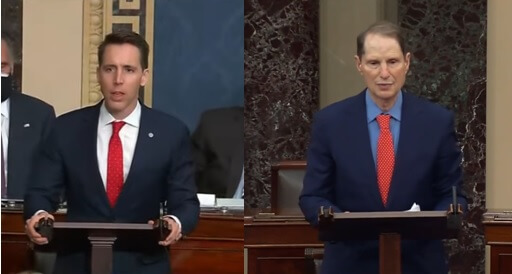 It has became a case of dueling ethics investigation.

First was Senator Ron Wyden’s and other Senator’s call for an investigation into Senator Josh Hawley:

“When Senators Ted Cruz and Josh Hawley announced they would object to the counting of state-certified electors on January 6, 2021, they amplified claims of election fraud that had resulted in threats of violence against state and local officials around the country.  While Congress was debating Senator Cruz’s objection, a violent mob stormed the Capitol.  These insurrectionists ransacked the building, stole property, and openly threatened Members of Congress and the Vice President. Dozens of police officers were injured; five people died, including U.S. Capitol Police Officer Brian Sicknick.  By proceeding with their objections to the electors after the violent attack, Senators Cruz and Hawley lent legitimacy to the mob’s cause and made future violence more likely. “

Then Senator Josh Hawley responded with a counter-investigation:

“U.S. Senator Josh (R-Mo.) is filing a counter-complaint today against seven Senate Democrats who called for an ethics investigation into his objection to certifying Pennsylvania’s electoral count. The Democrats admitted in their complaint that Hawley’s electoral college objection was lawful. In a letter to the seven Democrat Senators, Senator Hawley called out the senators for their historic partisan abuse of the Senate ethics process and potential coordination with dark money groups. Senator Hawley wrote, “The idea that one Senator who disagrees with another Senator can therefore have that Senator punished, sanctioned, censured, or removed is utterly antithetical to our democracy and the very idea of open, lawful debate. This line of thinking is, however, sadly consistent with the new woke-mob mentality that you should cancel anyone who disagrees with your views. Your baseless allegations are in that sense unfortunately typical of today’s leftwing cancel culture, a culture that tramples on the democratic traditions that left and right once defended together.”