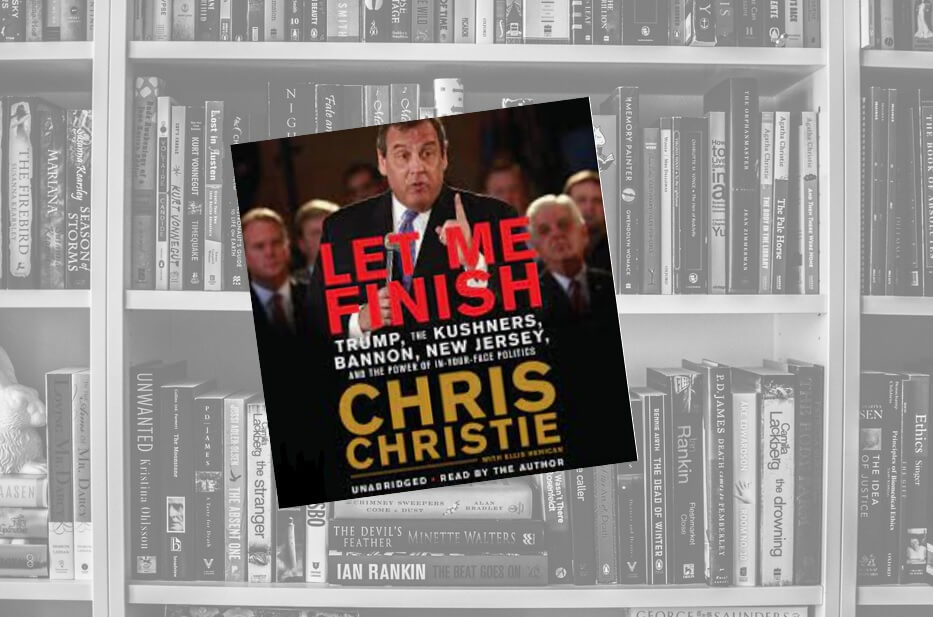 Chris Christie‘s memoir Let Me Finish is one fine book. This relatively short read is filled with anecdotes that have not been widely reported, such as how he got to know Donald Trump back in 2002. Appointed by George W. Bush to become the U.S. Attorney for New Jersey, Christie began making social calls to the federal judges that rule in his jurisdiction. One of them was Judge Barry, Maryanne Trump Barry.

We had a lively conversation that morning. She said we had some mediocre lawyers on staff who had to go if we were ever going to inject some real energy into the office. How right she was! She had other smart suggestions about how the US attorney’s office could be improved. She obviously still loved the place. It was where she’d met her husband, the attorney John Barry, who had died of cancer two years earlier at age sixty. Despite her obvious exuberance, the judge still seemed heartbroken about his death.

“Chris,” she asked when I stood to leave, “would you be willing to do a favor for me?”

“Would you be willing to have dinner with my little brother?”

That’s exactly how she put it: “my little brother.”

“Well, Judge,” I told her. “Donald can feel free to call my office and set something up.”

“No,” she said, shaking her head. “He doesn’t know you. I told him I was having a meeting with you. He was concerned that calling you directly would be inappropriate.”

I shot her a quizzical look: Donald Trump? Inappropriate? Seriously?

“Judge,” I said. “I’ll have dinner with your brother. You just tell him to have someone call Nancy Manteiga, my assistant. I’ll tell her to be expecting a call from his office. We’ll do it assistant to assistant. He and I don’t even have to speak.”

So, one night in May 2002, I met Donald Trump for dinner at Jean-Georges, the grand nouvelle cuisine restaurant in the Trump International Hotel and Tower at Columbus Circle. Just the two of us.

Donald strode in like he was the landlord, which he was. He gave me a warm handshake. We sat at a large, round table, perfectly positioned beneath the L’Observatoire lighting sculpture at the center of the bright white dining room, where we could be seen by everyone. He ordered for me.

Seared scallops and cauliflower with caper-raisin sauce as my appetizer—I’m allergic to scallops—and roasted lamb loin for my entrée. I’ve always hated lamb.

I didn’t complain, though I had to wonder: Who does he think I am, ordering for me like that? One of his chicks? Donald had divorced his second wife, Marla Maples, two years earlier. According to the New York Post’s Page Six column, his new “gal pal,” as the Post put it, was the Slovenian model Melania Knauss. I was just grateful the Jean-Georges portions weren’t too large.

I could detect no agenda on Donald’s part, other than getting to know the new US Attorney in New Jersey, a state where he owned a golf club in Bedminster and casinos in Atlantic City. He didn’t ask for any favors. As US Attorney, I didn’t have regulatory authority over gambling casinos. The state handled that. He just seemed to want to sit and chat and get to know me. For my part, there wasn’t anything I wanted from him, but I figured it didn’t hurt to know Donald Trump.

He told a lot of stories, and I told some, too. We talked about people we knew in common. We talked about how the city was doing after 9/11 and what he thought of George W. Bush, which wasn’t much. Donald was opinionated. He was bombastic. He was entertaining. He talked about his business with infectious enthusiasm and considerable detail. I came away with the impression that public Donald and the private Donald were pretty much one and the same.

We walked out of the restaurant together into a beautiful New York City night. There was a couple waiting outside the hotel. Tourists. “Mr. Trump,” the woman said as we got closer. “My husband and I are huge fans. He’s the biggest fan of yours.

Is there any way he can have a picture with you?” Donald rolled his eyes. “I’m running,” he said. “I’ve got another appointment.”

“Please, Mr. Trump,” the woman pressed. “We’ve been waiting out here for an hour because we were told you were inside the restaurant. Would you please take a picture with him?”

Donald glanced at me, then at the husband. “Okay,” he said. “Come over here.”

The man stepped forward. Donald put his arm around the man’s back. The woman had one of those black-and-yellow Kodak disposable cameras that were popular in 2002. She aimed and pushed the button, and the shutter did not click.

She pushed again. Still no click. And again. Nothing. Probably she’d forgotten to turn the little knob to advance the film.

“I’m sorry, Mr. Trump,” she said. “I don’t know why it’s not working.” I could tell that Donald was growing impatient. I had a sense this wasn’t going to end well. Then, I watched in amazement as Donald deftly extracted himself from the situation in a way that I now recognize was classic, trademark Trump.

He looked at the woman and said matter-of-factly to her: “Sweetheart, let’s do this the next time we get together.”

Then, without so much as a breath, he turned and was gone. He pivoted into the back of his waiting black limo and closed the door.

I was still standing there. The couple had no idea who I was and no interest in me. But I stood there for another moment shaking my head.

“Did he really just leave?” the woman asked me.

“We’re never going to get together again, are we?” she asked.

They wandered off into the crisp Manhattan evening. I walked back to the parking garage to get my car. I was still shaking my head as I drove back home to New Jersey.

Sweetheart, let’s do this next time we get together.

If that didn’t perfectly encapsulate the real Donald Trump, I don’t know what would.

Christie was well-positioned to be the Republican nominee in both 2012 and 2016. He turned down his first chance, and then Trump took away his second chance. Had Christie ran in 2012 or Trump not run in 2016, Judge Barry’s younger brother would probably have gotten no mention at all in a Christie memoir, but this book is filled with the former New Jersey governor’s interaction with the 45th President, many more such anecdotes are worth posting to the pages of the Oregon Catalyst.