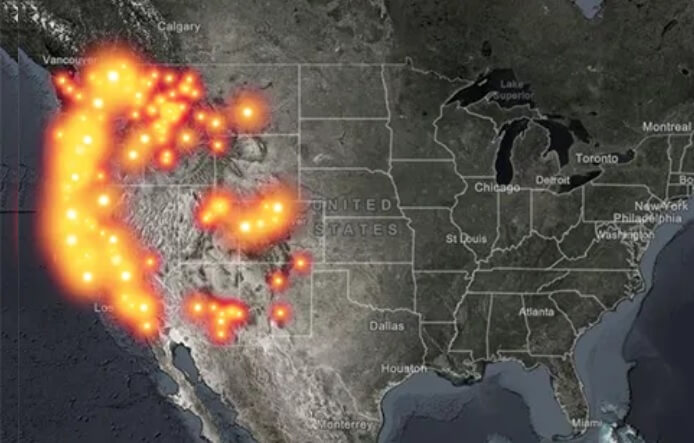 “Frankly, I think there’s a [2018 California] Camp Fire in Oregon’s future. I also believe it will be much worse than the four Tillamook fires that burned some 350,000 acres in today’s Tillamook State Forest.”

Our 99-year-old family-owned company lost 75 million board feet of timber in last September’s Santiam Fire. Trees of varying ages that were planted on 6,000 acres of company-owned land north of our mills in Lyons, Oregon, went up in smoke.

Salvage logging and replanting began immediately. Last winter, we planted 456,000 new seedlings. Another three million will be planted this year and next.

Much worse than our loss were the losses suffered by 700 families in the Santiam Canyon who lost their homes and businesses. Detroit and Gates were overrun by wind-driven flames on Sept. 9. High winds blew down power lines between Detroit and Mehama, sparking 13 fires.

Parts of Mills City and Lyons also burned, but the losses would have been much worse had the fire burned further west into Stayton and Salem. Instead, the wind shifted and it turned north into our lands.

Oregon is in big trouble – a direct result of an unprecedented wildfire crisis that is sweeping the western United States, posing an alarming and increasing risk to our state’s forests, rural communities and family-owned businesses.

We operate two state-of-the-art veneer mills in Lyons, a co-generation plant in Lyons that converts wood waste into energy, a plywood plant in Mill City, and the only mass ply panel plant in the world, which is located between Lyons and Mill City. Suffice it to say, our family’s capital investment in Oregon’s future is huge.

The Santiam Canyon has been our home since 1875. We love it here. Despite very concerning political unrest in Salem and Portland, western Oregon remains one of the best places on earth to be in the tree growing and wood processing business. Our family thus welcomes the surge in bi-partisan political interest in the West’s forest health and wildfire crisis.

There is some irony in the fact that this resurgence is currently led by Joe Manchin III, the West Virginia Democrat who chairs the Senate Energy and Natural Resources Committee, and John Barrasso, his ranking member and a Wyoming Republican.

Manchin is frequently in the news because the U.S. Senate is split 50-50, so the Biden Administration needs his vote to advance its progressive agenda. But blue collar coal miners in his home state of West Virginia have been voting for Republicans since 2000. Trump carried the state in a landslide, winning most counties by more than 70%. Credit goes to the Obama Administration’s effort to shut down the state’s coal mining industry. Manchin, who hails from Farmington, a small coal mining community, thus finds himself in the catbird seat.

Barrasso grew up in Reading, Pennsylvania, a major rail transportation route for the state’s coal mining region. After completing his medical residency at Yale University in 1983, he joined an orthopedic practice in Casper, Wyoming, and stayed there until he entered politics in 2008. He was reelected to the U.S. Senate in 2018, garnering 67% of the vote.

Although Manchin and Barrasso both seem out of place in the career-heavy U.S. Senate, they have emerged as leaders in the long-running and often rancorous debate over the fate of the West’s dying national forests.

When retiring Forest Service Chief Vicki Christiansen testified before the Senate Energy and Natural Resources Committee on June 17, Manchin and Barrasso led the questioning in a conversation that soon turned to salvaging fire-killed timber. Manchin wanted to know if the Forest Service planned to increase its rarely used salvage program. Christiansen explained that such projects are subject to extensive environmental reviews.

“What are we evaluating?” Manchin asked. “It’s dead. With all due respect, it just seems like it’s ridiculous that we don’t salvage it for productive use that would be helping the economy. It’s a resource we are wasting.”

Barrasso followed with a rhetorical question many have been asking for years. “Do we need to dramatically increase the amount of federal forest acreage that is treated annually?”

“Yes Senator, we do,” Christiansen replied, noting the need for a “paradigm shift” that would require billions in new funding but would allow the Forest Service to treat two to four times as many at-risk acres annually over the next decade.

Annually, 70% of the forestland burned in the United States is federally owned. Maine Senator Angus King wanted to know why. “What the hell is happening?” he asked Christiansen. She explained that the Forest Service had taken an “ecosystem approach” to management.

The transition from managing forests to managing ecosystems occurred following the government’s 1990 decision to list the Northern Spotted Owl as a threatened species. In the aftermath, the Northwest Forest Plan cut federal timber sales in the Pacific Northwest from 5.5 billion board feet to 500 million feet.

King then asked if there was a connection between the mandated harvest decline and the dramatic increase national forest acres annually destroyed by wildfire.

“Yes sir, there is,” Christiansen replied.

Last summer’s 402,274-acre Santiam Fire was far from the worst wildfire to burn on federal lands. By far the worst was northern California’s 1,032,648-acre August Complex. The lightning-caused, wind-driven fire blew 38 separate fires into one giant fire that raced across six counties and wasn’t contained until Nov. 11. It was twice the size of the 2002 Biscuit Fire, Oregon’s largest in modern history.

For perspective, we have to go back to 1910, the year the Big Burn destroyed three million acres in northern Idaho and western Montana, most of it in a 48-hour firestorm that leveled several towns. Eighty-six died, one more than the death toll in the 2018 Camp Fire, which destroyed Paradise, California.

Frankly, I think there is a Camp Fire in Oregon’s future. I also believe it will be much worse than the four Tillamook fires that burned some 350,000 acres in today’s Tillamook State Forest between 1933 and 1951.

Of great concern to our family is the long-running conversation about managed fire, a term given to “allowing fire to play its natural role in forests.” This is exactly what the Forest Service did in the Santiam Canyon in the days leading to the blow up. The agency transferred a twin-rotor helicopter from nearby Gates to central Oregon. It had been flying water from the Detroit Reservoir to flare-ups near the Opal Creek Wilderness. Soon after, high winds drove the fire down the canyon.

Congress is again considering a proposal that would permit the Forest Service to expand its use of managed fire. Our reading of the National Environmental Policy Act suggests this is illegal because it constitutes a major federal action that can’t be initiated without an Environmental Impact Statement requiring years of study. It is clearly not a tool fire crews can use on the spur of the moment.

The only science-based tools the Forest Service can safely use to manage forest growth are thinning in forests that have grown too dense and intentionally setting prescribed fires that are generally used in combination with thinning.

There are millions of acres in the West’s national forests that need to be thinned before they die and burn. Unfortunately, many environmental groups oppose all forms of active forest management. For them, wildfire in the broader context of ecosystem management is the best choice. But the 30-year history of wildfire in the West makes it clear that this is a fool’s paradise.

From long years of experience with our own forests, I can tell you that none of the public’s forest restoration goals are achievable if the Forest Service does not first protect its trees from insect and disease infestations that are precursors to wildfire. Yes, fire can play a role when and where it can be safely used, but the Santiam Canyon is not one of those places. Nor is most of western Oregon.