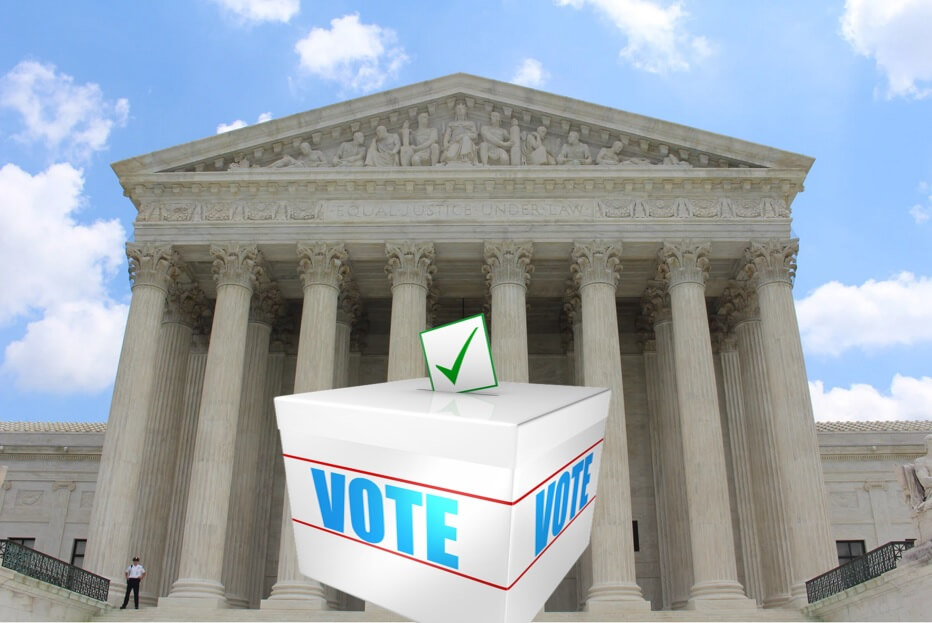 National Review explains, “The U.S. Supreme Court this morning, in Brnovich v. Democratic National Committee, upheld two voting laws in Arizona that are widely used in many states: (1) an “out-of-precinct rule” that bans counting provisional ballots if they are cast in person in the wrong precinct, and (2) a ban on “ballot harvesting” that permits only certain persons — i.e., family and household members, caregivers, mail carriers, and elections officials — to handle another person’s completed mail-in ballot. The Court’s decision, in an opinion by Justice Samuel Alito, divided 6–3 along ideological lines. This is a big one. The two Arizona laws were challenged under Section 2 of the Voting Rights Act, 52 U.S.C. § 10301, and under the 15th Amendment’s ban on intentional race discrimination in voting. Section 2 is the primary tool used to challenge voting laws across the country. Brnovich is a landmark decision because it is the first time a majority of the Court has set some basic “guideposts” for what Section 2 prohibits, and what it allows, in how ballots are collected and counted. The result should make it harder for Democrats to bring knee-jerk lawsuits over every change in voting laws without showing that they present a genuinely discriminatory obstacle to the overall opportunity to vote. For that reason, we should expect to hear lots of alarmist shrieking about the Court “gutting” the Voting Rights Act.But in reality, while Alito’s opinion declined to adopt a rigid test, its list of five main guideposts for Section 2 cases should make it easier for federal courts to distinguish real, substantial burdens on voting rights from the ordinary inconveniences that come from any system that has rules…”

As the National Review predicted about “alarmist shrieking” Oregon’s Secretary of State responded by calling it “catastrophic”.

Oregon Secretary of State Shemia Fagan said in her a press release, “The Supreme Court’s decision today is a catastrophic outcome for voting rights across our country. As Justice Elena Kagan wrote in her dissent, ‘The Voting Rights Act is ambitious, in both goal and scope. When President Lyndon Johnson sent the bill to Congress, ten days after John Lewis led marchers across the Edmund Pettus Bridge, he explained that it was ‘carefully drafted to meet its objective—the end of discrimination in voting in America’….The Supreme Court has kicked away the foundation of the Voting Rights Act, effectively allowing the disenfranchisement of American voters, especially those who’ve historically been prevented from exercising this sacred right…More must be done across the country. Congress must act to strengthen voting rights and access to the ballot for all Americans by passing the For the People Act (HR 1). I will not rest until every American voter enjoys the same privileges and access as Oregonians.”