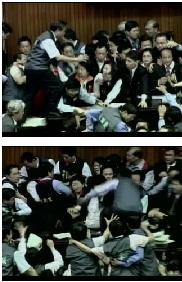 The picture on the right may not be the Oregon Legislature, but it may be in a few weeks. The picture is of the Taiwan Legislature in an all out brawl this week. There are signs that such tensions are occuring right here in Oregon.

Harry Esteve of The Oregonian wrote an interesting piece today about rising tensions in the State Capitol.

Relations are so bad that one day last week a Republican member missed a vote because he had to go to the bathroom and Democrats refused to let him cast the vote when he came back”¦Rank-and-file lawmakers worry about the deteriorating tone of the session and how it may further damage the body’s already battered image among the public. Several times last week, House members stood to air concerns about the spate of meltdowns on the floor. Among them was Rep. Bob Jenson, R-Pendleton, one of the elders of the Legislature and a 10-year veteran of the House. “We’ve taken a pretty terrible beating since I’ve been here, in the eyes of the press and in the eyes of a lot of people,” Jenson said. “Maybe it’s time for us to start acting like legislators.”

The article talks about how both the Republican Leader Scott and the Democratic leader Rep. Hunt are accusing each other of playing politics. There are real signs that the process is breaking down, and that fairness may be the victim.

Also out today on the same theme is Rep. Kim Thatcher’s press release on the mishandling of procedure over the Measure 37 re-write bill. Here is what Rep. Thatcher had to say:

Democrats rejected that plan without much debate. Without giving you a headache about political games, here’s a peek at what happened. Various proposals started in the so-called Joint Land Use “Fairness” Committee. However, in just four days, Democratic lawmakers broke off negotiations with Republicans and pushed through their own bills with very little public feedback. Democrats say their new proposal is going to a special election but so far no legislation has moved to the House Floor specifying when this election, estimated to cost nearly $2 million, will be held.

In addition to the referral which will gut Measure 37 and discourage anyone from fighting for their property rights in the future, Democrats also allowed state and county governments another year to process claims. Sadly, some of the people who’ve filed claims are quite elderly and may not be around long enough to secure justice and peace of mind for their families.

The Session is nearing the end where things get heated. The public deserves better, and now is the time to change before it gets worse.