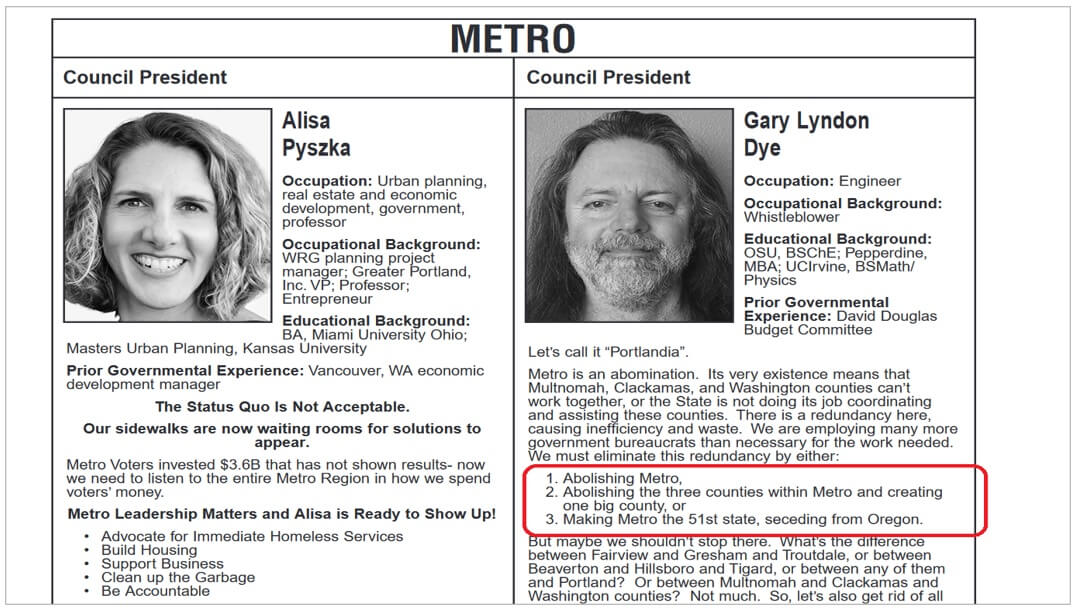 Candidate, Gary Lyndon Dye, brings new levels of satire and shock therapy to the very predictable local Voters Guide. Candidate Gary Lyndon Dye is running for the Council President of Metro. As you may know, Metro is the regional government above Multnomah, Clackamas and Washington County and does not exist elsewhere in America (except loosely in Minnesota).

Here is a snippet of Mr. Dye’s Voter statement;

Metro is an abomination. Its very existence means that Multnomah, Clackamas, and Washington counties can’t work together, or the State is not doing its job coordinating and assisting these counties. There is a redundancy here, causing inefficiency and waste. We are employing many more government bureaucrats than necessary for the work needed.

We must eliminate this redundancy by either:

1. Abolishing Metro,
2. Abolishing the three counties within Metro and creating one big county, or
3. Making Metro the 51st state, seceding from Oregon”

Mr. Dye’s seceding the three Portland area counties at the same time Greater Idaho might be splitting off a dozen rural counties might leave the remaining Oregon looking like a skinny Gerrymandered roadkill bird.

“But maybe we shouldn’t stop there. What’s the difference between Fairview and Gresham and Troutdale, or between Beaverton and Hillsboro and Tigard, or between any of them and Portland? Or between Multnomah and Clackamas and Washington counties? Not much. So, let’s also get rid of all of the cities and counties within Metro. Do we need multiple police departments, road departments, parks departments, personnel departments, etc., existing within their respective artificial boundaries? I believe we can lay off 1/3 of the government employees working for all these governments, and provide the same services that we get now. And that means reducing our bloated property taxes by 1/3! Heck, we can even become the first government to cross state lines by incorporating Vancouver, Washougal, Battleground, and Clark County! Why not rescue them, too?”

Here is his full statement: 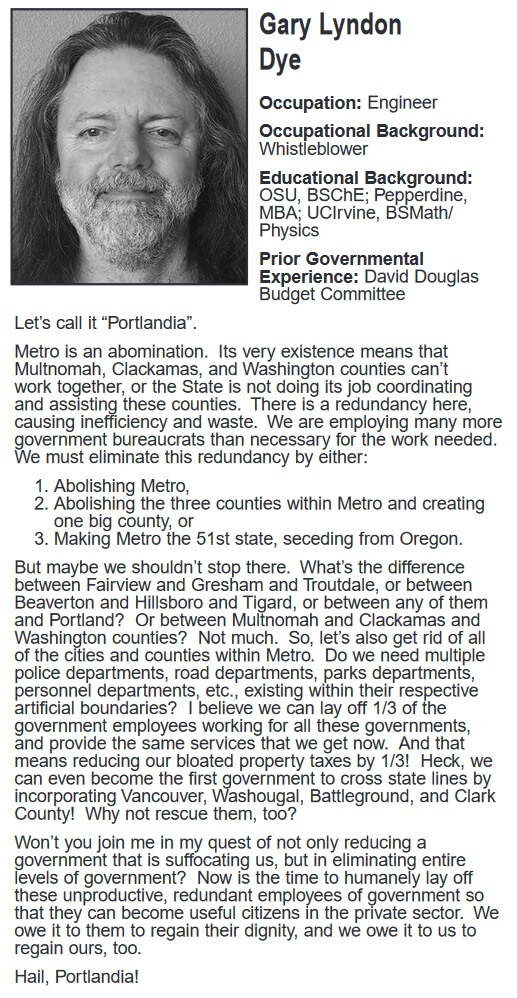